Church – and the kingdom – is not about me; it’s about God and all of us together. 2017 is the beginning of a new season, a new chapter, a new day and I personally can’t wait to see where God takes us all on the journey.

Every Christian shares a clear purpose that is given to all who love and obey God. As Christians who who are aiming to live a Christ-like life, we all have the same purpose as recorded in Matthew 22 and 28…

After purpose, we need vision
Purpose is the same for all Christians but vision is specifically related to what God is highlighting for a particular person or group – in this case, our churches.

Purpose is continual and unchanging but vision is seasonal and achievable! So the three-fold question we have to ask ourselves is, ‘What is the vision of my church? What is God allowing us to see? What is he pointing our focus toward?’

Indeed this is a question for every church as we all move further into 2017!

An initial thought I shared with my own church on my recent induction evening was this: ‘The one word which has certainly impacted me greatly since I first walked in the doors here – is restoration.’

You’ll have worked it out that it so happens my church already has a vision which revolves around restoration and already demonstrates restoration in so many ways!

And so I expanded the challenge (as I would encourage any church to do) – ‘Let me remind you of, or introduce you to the concept of the second step! Because I think the time is here for us as a church to take the second step of restoration.’

Why is a second step important?

Because Christians and churches can’t go to the next level without taking the second step! There is always a second step, a bit more, a stretch, a leap, another bite of the cherry.

The Bible tells us in Romans 10 that when it comes to our connection to God we need to both believe and confess. Then a bit further on we read in James 2 that faith and action need to work together to see things done. Jesus himself, when asked what the greatest commandment was, said ‘Love God and love people.’

We have two steps to follow: The first and second steps! And we need to note that our next level is always determined by our second step!

So what might that second step look like for a vision that is focused on restoration? I think there could be three parts to it:

1) Restoring hearts
I see a hunger to develop deeper and stronger relationships with God; for individuals to relate to God in a new and fresh way and I am reminded of Ezekiel 36:26-27 which says, ‘I will give you a new heart and put a new spirit in you; I will remove from you your heart of stone and give you a heart of flesh. And I will put my Spirit in you says the Lord.’
2) Restoring hope
I see purpose, meaning, passion and energy returning to individuals as hope is restored in this second step of restoration. Let’s remember that hope is described in Hebrews 6:19 as ‘an anchor for the soul, firm and secure.’
3) Restoring health
I see the restoration of physical, emotional and spiritual health as part of this second step and as that happens I believe we will see a new depth and strength in relationships being restored both inside and outside the church as we engage with other churches and community organisations, businesses and governments throughout our city, state, nation and world.

So, let’s be bold, let’s take that second step!

Why is this so?
Because the second step builds on the first one and that means you have get the first one right to be able to attempt the second! Whether you are walking, building furniture or dancing you must be able to do step one at least some of the time before attempting step two – that’s why step two is always harder!

But should difficulty put us off having a go at the second step?  No, never – life is difficult at times and that is how we learn and grow.

As it happens, my church has already taken the first step and has done amazing work in the area of Restoration – both inside the church and outside of the church. There is no doubt about that, but I believe the time for step two is coming.

Awesome! Who wouldn’t want that? The second step is about –

So let’s move forward without fear because God says he will be with us every step of the way – ‘If the Lord delights in a man’s way he makes his steps firm; though he stumble he will not fall, for the Lord upholds him with his hand’ (Psalm 37:23).

God will be with us as we take the second step! It will be a step in the right direction, it will be about learning and growth and it will change our perspective.

Luke gave us great second step examples!
Luke 5 – Remember the fishermen with Jesus who needed to learn trust – their second step was a step of obedience that led to a miracle. These guys had been fishing all night, they were exhausted and they were washing their nets! But here stands Jesus quietly saying go out again – so what does Peter do? He doesn’t argue or complain, he says because you have told me to, I will.

Luke 5 – And what about the men who wanted their paralysed friend to be healed and couldn’t get him to Jesus with their first step only, so they took the second step and lowered him into the room through a hole in the roof! Love in action!

Luke 10 – The Good Samaritan exhibited such extraordinary selflessness and generosity by taking the second step. Step 1 – he saw the hurt man and took pity on him, and Step 2 – he went over to him, helped him by bandaging him, putting him on his own donkey, transporting him to a motel, paying for a room and telling the owner that he was coming back in a few days to pay more money if there were any other costs associated with the care of the hurt man. Awesome!

Remember, we can’t go to the next level without taking the second step

So, let’s pray and talk and think, as we prepare to take our second step of restoration!

There’s a story that summarises what I am saying above…

Some readers may have heard it before but I believe it will be of encouragement to everyone who contemplates the second step. It involves a women’s Bible study group who were working through various parts of scripture when they found themselves confused with  Malachi three.

The third verse says about God that ‘He will sit as a refiner and purifier of silver.’ The ladies wanted to know what this actually meant to them as Christians and sent one of their number to a local silversmith.

The explanation she came back with amazed the others –

That’s our caring God! With his eye always on us he will help us take the second step, removing impurities and hindrances as we journey forward! We too can be the image of Christ in our community, to the world. 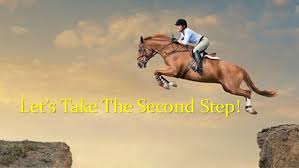