So many times we hear people raving about our amazing world of computerisation – and the vastness of the information one can find so quickly on Google. Such as the oft-quoted ‘Got a question? Ask the computer – Google knows everything!’

And countless times this is true. Google is regarded as the biggest dictionary in the world!

But, having heard such a proclamation yet again recently and with Easter only a few weeks away, our thoughts went back to the heart of an article/story we ran a few years back.

And so this blog is all about a certain question – one that even the latest, greatest super-duper computer couldn’t answer and broke up into pieces trying! The question? A single three letter one – Why?

Why?
As an adverb the word means ‘For what purpose, reason, or cause; with what intention, justification, or motive.’ As a noun it infers ‘a reason or explanation.’ Parents soon realise that this is one of the first words their children learn. It’s so often repeated that it seems to be the only word they know!

One of our favourite ways of relaxing is e regularly relax by watching good old movies on DVD (as well as good new ones of course).

A favourite has always been the classic TV cult series The Prisoner in which its creator, the late Patrick McGoohan, played an unnamed British secret agent who, on suddenly resigning under unusual circumstances, is taken captive to a mysterious locale in Wales known as The Village to be interrogated as to his real motive for leaving the service – in the mind of his inquisitors a big ‘Why?’

In episode Number 6 (as he’s referred to, not by name) he turns the tables on his inquisitors who are using The General – a so-called invincible computer-type machine built by a learned professor and that apparently knows everything and the answer to any question.

When the machine is about to be asked who in the Village is secretly assisting Number 6, the prisoner interrupts by requesting to type in a question that he claims cannot be answered.

‘Impossible,’ he’s told. ‘There’s no question that The General can’t answer.’ The prisoner smiles and says, ‘I have a question’ inferring it is insoluble to man and machine.

The machine starts whirling. Minutes begin to go by and despite every endeavour the machine cannot answer the unmentioned question! Its sounds become groans and moans like death-cries.  Abruptly it goes haywire, smoke and sparks flying everywhere. To the total amazement of the proud self-confident inquisitors, with a loud explosion it disintegrates.

The question he stated as being ‘Insoluble to man and machine’? One unanswerable three letter word – ‘Why?

An Easter Why?
Many decades ago a prominent Melbourne businessman took us to lunch and while relaxing after the very enjoyable meal he steered the conversation to Christian matters, especially that year’s fast approaching Easter.

As we shared the real reason for this celebratory season – what we believe to be the most important event in the church calendar – and recounted the gospel story of the Son of God being cruelly treated and then crucified on Calvary, our friend suddenly exploded in wrath and distress. He slammed the table!

‘Why?’ he vehemently asked. ‘Why? If Jesus were here today in this city, cruelly beaten and wrongly accused and imprisoned, about to be put to death on a cross, I’d raise an army and storm that prison and release him. They would not do to him what they did 2000 years ago while I’m here!’

We looked at his face and it was obvious that he was deadly serious. We later learned that if the Bible Easter story was happening today he could probably carry out his dramatic declaration. (He’d been active in WW2 and a prisoner himself. To the consternation of his enemies he often escaped from prisons – and from entrapment on quite a few occasions).

He was a good man whose mother had regularly prayed for him – he credited his escapes and victories over wartime enemies to her prayers to her God who heard and cared. In sharing the gospel with him, he confessed he too prayed to God, that he believed Jesus was God’s Son and that he’d been a good man.

But this was a religious thing – he hadn’t grasped the truth that because we’re all sinners we all need a Saviour and need to genuinely repent by asking forgiveness of sin and accept Jesus as the one who had to die to save us.

Unable to answer the question ‘Why?’
It was obvious that while he confessed belief in God, a personal relationship with the Father through Jesus was missing – he just couldn’t grasp the reason why Jesus had to be dealt with so viciously by evil men and crucified.

No matter how much we tried to show that in God’s purposes Jesus’ sacrifice had to happen as it did, indeed salvation could occur no other way than by Christ’s death on Calvary, he repeatedly shook his head sorrowfully, unable to grasp the facts of this greatest of all historical events.

Later we must have sat together in his expensive plush car for over an hour as we endeavoured to lead him into an understanding of this wonderful mystery – that Jesus as the Christ, the messiah, had to die to redeem humankind!

Sadly he eventually said farewell and left with a heavy heart. Our hearts were heavy too – for a different reason – and we sat in our own car praying for him that the revelation of Christ and enlightenment of the real purpose of Easter would fill his troubled mind.

Christians really are privileged
As we left him it came to us afresh that everyone who has had the glorious revelation that Jesus is our Saviour, that his horrible but substitutionary death on Calvary was the only way of paying the price for our sins and has received Christ within is a highly privileged person.

By accepting Jesus as Saviour we mean a genuine repentance and conversion – not some wishy-washy response to a quick altar call to ‘just accept Jesus into your heart and you’ll go to heaven.’ But through meaningfully accepting God’s John 3:16 way to salvation, genuinely repenting of sins and determining to follow Jesus whatever the personal costs.

Let’s face it… the crucifixion and horrible death of the Son of God, the greatest and most loving person ever, is a tremendous mystery. We do need, by God’s grace, a revelation to understand and accept by faith why he had to die so cruelly in order to pay the penalty for our sins.

O what love Jesus had for us and how incredible the why of God, how intricate his plan, how deep his motive, how meaningful his reason – as various scriptures claim and many churches will meaningfully proclaim this Easter.

Sadly our friend had left us, echoing again the word ‘Why?’

The biblical answer to ‘Why?’
Many are still asking that question. What a wonderful event the real story of Easter is – nor about chocolate eggs and bunny rabbits but about the greatest friend anyone can ever have, one who willingly gave his life for all on that ugly cross at Calvary, died and gloriously rose again as he trusted God.

We encourage every Christian to take whatever opportunities come up over this Easter period to share your faith with those who ask ‘Why?’ Pray that a revelation with come to them, that they will not be blind like our friend, that the Holy Spirit will get through to them and they too will know the why of Jesus’ substitutionary death over 2000 year ago.

Calvary! What an amazing event engineered by Father God. No army on earth or from heaven for that matter could have stopped it occurring: It had to happen to fulfil the promise of scripture.

John 3:16 is still the heart of it all – ‘This is how much God loved the world: He gave his Son, his one and only Son. And this is why: so that no one need be destroyed; by believing in him, anyone can have a whole and lasting life’ (Message Bible, emphasis ours).

Spread the answer this Easter! 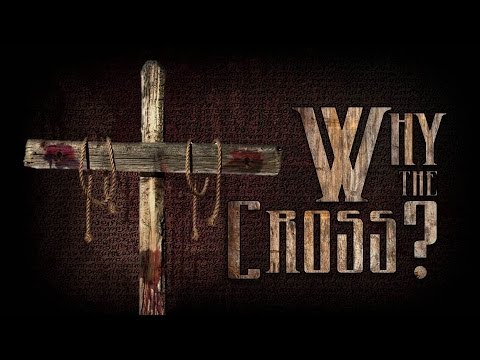