She was diagnosed with multiple myeloma, a cancer of the plasma cells in the bone marrow, which is considered incurable. But with Jesus-centred faith, prayer, and a powerful dream, God brought a miraculous healing that confounded her doctors.

‘They said I had three to five years to live,’ says Tecla Miceli. ‘It was dreadful and I was scared to death.’

Tecla grew up in Sicily and came to the USA as a 16-year-old with her parents. Fortunately the cancer was caught at an early stage. As she was opposed to chemotherapy doctors agreed to monitor the progression of the cancer with bone surveys and blood tests every 60 days.

‘The oncologist did a spinal and it came out at 17 blood plasma level and the threshold is 5,’ says Gary LaFerla who accompanied his mother to the doctor visits.

Alarming cancer cells increase
At 17%, doctors were willing to wait on the chemo. But after three years of monitoring Tecla, doctors noticed an alarming increase in cancer cells. ‘It was full blown cancer, at least 27% in her blood,’ Gary says.

Raised as a nominal Catholic, Tecla was born again through the influence of Gary and his sister Laura, who were involved at Calvary Chapel, Costa Mesa, California.

Nicky Cruz, the former gang member, was speaking when Tecla visited Calvary Chapel for the first time. Moved by his message, she felt compelled to go forward. 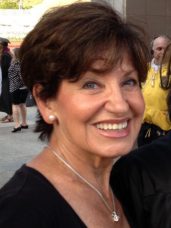 ‘I felt a big flame in my heart literally pushing me to go up there,’ Tecla (left) recounts. ‘I accepted Christ but I didn’t know what I was doing. I drove home and I felt different. I never wanted to sin again. The next morning I woke up with a smile on my face and I felt so peaceful.’

She finally grasped her daughter’s earlier words. ‘For the first time I really understood what Laura meant when she told me about that the peace of the Lord fills the heart of a new believer and how the sky looks bluer and the grass greener. Throughout my illness Laura prayed with me daily and gave me positive and encouraging words of faith in Jesus.’

Faith – the vital component
Tecla’s faith became a vital component as she faced a potentially deadly health crisis. ‘This cancer eats the bones from the inside and they will collapse,’ Gary noted. ‘It can be very painful.’

After 36 months, the scan of Tecla’s head now revealed cancerous lesions covering her skull. ‘She was weak all the time, sleeping a lot, not able to move much,’ Gary recalls. ‘She had blood splats all over her arms and legs. She was very anaemic. It’s a horrible type of cancer.’

Tecla’s doctors wanted a bone marrow biopsy from her spine before they started chemotherapy. ‘I had a whole week to think and pray and was petrified all the while,’ Tecla recounts. ‘I didn’t know if I wanted chemo or if I should just die naturally. I was crying all the time.’

One evening Gary (left) had dinner with his mother because he was flying out of Orange County the next morning.

After their meal he said, ‘Mom, let’s kneel down and pray.’ They both knelt down together. ‘Mom, the psalms are full of God’s promises. I want you to read all of them and stand on God’s promises. We will be praying for you.’

Tecla spent the entire week in her patio reading the psalms and praying. ‘That’s all I did. I prayed that God would heal me.’

A remarkable dream – and miracle
Tecla poured out her heart to God: ‘I know I have done it all, I’ve been married, have children, grandchildren, finished college, but I’m not ready to die yet. If you heal me I will tell of your miracle to anyone that wants to listen,’ she told God.

That night Tecla had a remarkable dream. ‘I was outside a market and noticed I had a cart filled to the brim with long loaves of bread. I tried to give some away but only some would take them.’

Then she found herself dangling from a foot-wide ledge, 30 feet above the ground. ‘I looked down, thinking I’m going to fall. All these people were looking up. I was hanging by a big thick nail with my right hand!’

Tecla thought she would surely die. ‘Then I realised the nail I’m holding is slowly creating a crevice and is sliding down. It was slowly bringing me down to the floor. When I reached the floor I cried because it was a miracle!

When she landed safely she cried out, ‘It’s a miracle, don’t you know it’s a miracle. God is real. Don’t you believe me?’ She took her shopping cart and started offering bread to people. Some took the bread and others did not.

Tecla awakened the next morning feeling perfect peace. ‘I understood the bread to be the Bread of Life,’ she says. ‘Jesus declared, “I am the bread of life. Whoever comes to me will never go hungry, and whoever believes in me will never be thirsty” (John 6:35).’

Astounded doctor
A few days later, Tecla had a bone marrow test, a painful procedure that required a strong sedative, but she woke up peacefully and surprisingly, and no pain after the test.

When Gary and Tecla went to meet with the doctor to go over the results, the oncologist had an unusual expression on his face as their appointment began. ‘You know how problematic this industry has become,’ he began. ‘Look at this. I’m curious. I already know we’re at 27-32, so she’s at full-blown cancer,’ he told Gary.

‘But look at this test I took from the spine… this came back at 5 or 6. That’s impossible. Blood plasma never retracts. It is an axiom of medicine. They must have made a mistake at the lab,’ he said, shaking his head in disbelief.

One of Tecla’s students happened to be a radiologist and the two doctors managed to connect by phone during the appointment.  The  radiologist  was convinced the more recent scan of Tecla’s skull was a mistake. On hanging up the phone, the radiologist said, ‘Well, this is completely stupefying to me… I don’t agree but I don’t know what to say.’

‘Do you believe in God?’ Tecla asked. When he replied ‘Yes,’ she proceeded to tell him about her dream and the prayers for her healing.

‘God does hear prayers!’
The doctor looked at them both with curious amazement and then said, ‘In 25 years of practice I have never seen anything like this before.’

He finally admitted that all her numbers were down, lower than when she first got diagnosed. Tecla began to cry and Gary was amazed.

‘The doctor called it an anomaly – his way of explaining away a miracle,’ Gary recalls. ‘But he too started crying because he was really moved by it.’ When the doctor regained his composure he said, ‘You are free to go and live your life… I will continue to monitor your blood tests.’

From that point forward, Tecla’s tests were all clean. ‘It was a miracle,’ Tecla exclaims. ‘Both my son and daughter and their families had each of their churches praying for me all that time and I want to thank them all. Prayer works and God does hear!’ 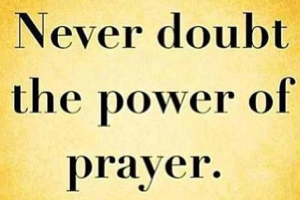 Mark Ellis is a seasoned senior correspondent ASSIST News Service (www.assistnews.net) and founder of the acclaimed www.GodReports.com a website that shares stories, testimonies and videos from the church around the world.