‘We don’t want you to go down there and help them other people,’ a short, dark man stormed threateningly.

On that warm Monday afternoon in the spring of 2000, my construction crew and I had just finished work on homes in this poor Gypsy settlement called the Valley, at the edge of the village of Albesti, Romania. Now we were being threatened by this irate man. His wife, brothers and cousins were all echoing his words.

‘If you go and help them people at the far end of the Valley, like you’ve been helping us, we’re going to beat you up,’ the angry Gypsy man told me through my interpreter.

To Romania with love
I’m an Englishman, born in Manchester and raised in Glossop, a small town nearby.  Being a builder, when God called me to serve him in Romania, I responded with a desire to use my skills to help in every way I could and for over 20 joyous years I’ve been doing so. It was here that I had met and married Rodica. We have a lovely daughter, Sabrina.

House building for the poor has been since 1998 and spread over many villages. Dreams from the Lord about running a ‘feeding with Bible stories to kids’ program in several villages and linking with local churches became part of our outreach. We would buy Bible cartoon DVD stories DVDs for kids showing them as we would feed them in local buildings. Watching these cartoons was a first exposure to the Bible for kids from non-Christian families. And, we praise God, they responded well! 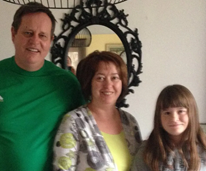 Poor parents were also being touched by God and we would move on from village to village. But… well do I recall one dangerous day in the Albesti village when I was threatened by the man mentioned above!

Background
For some years I had helping to encourage and evangelise with a church in Sighișoara.  Since the previous autumn we had come weekly to share the gospel with the Gypsies of Albesti.

We especially felt compassion for the women and children because they were without proper housing and often abused – the men didn’t work much, often getting into fist or knife fights, especially when drunk on cheap, ‘blue sanitary’ alcohol. Their wives and children lived in fear: if the men beat them their neighbours turned a blind eye to the bruises.

So, we rebuilt their cabins or built them new ones. We brought gifts and preached through fun-filled children’s programs, doing what we could to change hearts. Now we were so shocked that these people, particularly this stormy man could be threatening us!

Jealousy and anger-filled hearts
Just a few months previously, this man, like many of his relatives, lived in a metre and a half tall lean-to that he had built of scrap lumber and tree branches to shelter his family from the rain and snow. Now he had a sound wooden cabana with a proper roof, as did his brothers, cousins, and their families on the near side of the Valley. Sadly, now when they thought of their neighbours at the far end of the Valley enjoying the same decent housing, jealousy and anger had filled their hearts.

But, despite their threats, we determined to help every family there.

So, the next day I came back in the morning with my Romanian workers, Relu, Florin, and Fernando, and we started on the first new house in the lower part of the Valley. At about four in the afternoon I drove the men back to our house in Sighișoara and met our international ministry team. Sarah, on a six-month term, and Mike, Americans on a short-term missions’ trip, and two young Romanian women, Christina and Alina, completed our team.

Relu rode with me in my old blue Volvo, and the rest of the team followed in an orange Volkswagen minibus. We drove the few miles down to the middle of the valley. Then we rounded up the kids for the outreach time. Everything went smoothly, but during the program some of the kids warned us that the men were threatening to beat us up and smash our cars.

So, after the program, while the rest of the team packed up, Christina and I crossed the stream and followed the path in front of the houses we had built. Hidden around a bend, out of sight from our meeting in the middle of the settlement, the men had built a roadblock with three big tree branches. Two of the men were on our side of the stream, and I tried to reason with them, Christina translating for me. Attempting to diffuse the situation, I made the leader pose for a photo with me and his family in front of the cabana we had built them. But still they shook with anger and kept repeating, ‘We don’t want you to help them people down there!’

Christina and I went back to the others and told them what was going on. We prayed for wisdom, safety, unity, and clear-mindedness. Then I felt peace in my heart and thought, ‘Well, this is one for you, Lord.’ We got in the cars, Relu riding with me, and drove slowly up the muddy, bumpy road stopped just two car lengths from the roadblock.

Threatened with an axe
Right in front of us were four drunken, angry Gypsy men. Their wives and children stood on the far side of the roadblock, waiting to see what would happen. Relu and I got out of the car, telling the others to stay in the minibus. I walked toward the men with Relu behind me.

Relu translated for me and I replied, ‘But we’ve done everything we can for you. It’s time now for us to help the people at the other end of the village.’

The biblical verse about turning the other cheek came to mind, and I knew in my heart that if they struck me on the cheek, I would offer the other. These drunken men were standing in the way of God’s blessing… and I was determined to attack this evil God’s way.

Now I’m a big bloke, six feet four inches tall (1.93 metre) and 16 ½ stone (100 kilos). I walked up to the man gripping the axe, and looking down into his face, yelled, ‘Well, I’m going to put my hands behind my back.’ Relu translated for me and I added, ‘See I’ve done it. I’m not going to take them away from there.’

Then I went to my knees, put my head down and said, ‘Okay, do it… Do it… Do it… Now is the time, do it!’  I was thinking, ‘Oh God, I really hope it doesn’t hurt too bad!’ Even though I was scared, boldness flooded my heart.

They still shouted, ‘We don’t want you coming here,’ but when I didn’t feel a blow, my faith strengthened, and I stood up. ‘Why have you not hit me?’ I asked the man with the axe.

Restrained by an unseen hand
‘We won’t hit you because we know God is watching us.’ Then he was silent, shaking in his drunken anger. This gave me even more courage.

Relu who was just behind me, shared afterwards that she could see the sweat on his face and his anger as he had violently trembled, trying to strike me. She had heard the venom in his voice as he shouted again and again that he was going to do it.

But… something had physically restrained him, and he couldn’t hit me. In his drunken rage, no sudden mental or spiritual revelation could have stopped this man, whose body bore scars testifying to the violence he had practised all his life. No, he must have physically experienced God’s restraining hand. That’s how he knew that God was watching them all.

Then he shouted again, ‘But we still don’t want you coming here no more!’

‘Yes, we are. We’re coming here tomorrow!’ I declared.

‘If you come tomorrow, we’ll beat you up and break your cars.’

‘You can do it now, but we’re coming!’ I told him in a loud voice. ‘We promised God, the town mayor, and the people to help everyone. And if you don’t like it, then tough, because we’re coming. Now shift those trees or beat us up because I don’t want to wait here anymore.’

God’s protecting and saving power
After they moved the tree branches, Relu and I got back in the Volvo and we left Albesti. At home I learned that everyone in the minibus had been praying, especially when they saw me drop to my knees and the man had raised the axe high to strike a blow.

We didn’t return on Wednesday, but let the men cool off. On Thursday morning we held a meeting with all the people of the Valley. I told them how shocked and upset I was by their behaviour and asked if anyone was not happy with us. These families – even about two-thirds of the people who had not yet had housing built – said that they were indeed happy for us to come. Then the men who had threatened us said that they were sorry and asked forgiveness.

We continued building and ministering in that village until every family had new or rebuilt housing. During that time 17 people professed Christ as their Saviour and began attending church.

That year I learned a lot about God’s power to get you through battles in life, especially how to stand up for what is right, even when people want you to give up. And I’m incredibly grateful for God’s restraining hand that afternoon when he showed me that he really could protect me when I am about his business.

Growing ‘Food Outreach’
It’s a joy for Rodica and I to serve the Lord in this region of Romania, Rodica assisting in worship ministry and I ministering in several village churches and leading men’s meetings.

This has been a busy year for us as we ‘food outreach’ to 22 local church villages with this feeding program, sharing Jesus to both kids and adults with the focus on breaking down ‘legalism’ for a higher calling of the Lord .