Have you ever known people in the ministry that you felt didn’t receive their due recognition? Marie Monsen was one of those people.

Born in Sandviken, Norway in 1878, Marie became a school teacher. She went to China in 1901 initially to help the missionary couple sent there by her Lutheran church who needed a teacher for their children.

But because of the national unrest and turn of events in China, the missionaries left shortly after Marie arrived. The mission agency back in Norway didn’t have the funds to send for Marie as well, so she stayed back waiting for her ticket to arrive.

So many people needing help

Meanwhile, people kept coming to the mission home looking for help but Marie (left) was the only one there.  She would rush out to see what the emergency was and would face squalid conditions of starving, sick children. She didn’t know what do, she felt helpless and overwhelmed. The situations she faced each day seemed insurmountable. Her only solution to every situation would be to pray.

One emergency would be met by another further down the track, and then another in a nearby town. Everywhere she went she would just open her Bible and read especially the gospels where Jesus did miracles. Then she would pray for people with all sorts of problems, diseases and oppressions. She hadn’t seen this being done back in her Lutheran church, but she followed the examples in the Bible.

One day not quite sure where she even was, she was woken with yet more pleads for help. When she reached the home she saw a young boy, around 9 years old, dead – lying on a mat. His parents were distraught: this was their only son. They begged her to pray to her God.

Belief in the Bible and prayer results in a miracle
With childlike faith Marie opened her Bible, read the portion where Jesus raised a young son from the dead and prayed: ‘Lord, you are the same yesterday, today and tomorrow. Please raise this son from the dead.’

Then she put her Bible on the body. Instantly the boy’s eyelids began to flicker, then he took a deep breath and opened his eyes. The people were jubilant!

They pleaded for Marie to stay there which she did. Every day the house would fill with people that wanted to hear about this man Jesus – and his awesome power. Soon word got around about this remarkable woman that served a powerful God.

The days turned to weeks; the weeks to months. 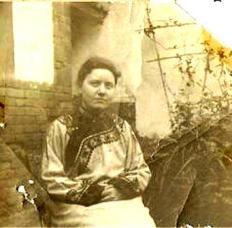 Inevitably the town down the hill wanted her to visit them as well, and so she would go on an evangelistic trail, stopping here and there. Everywhere she went signs followed. Her simple faith moved God’s hand.

A loose cannon missionary
Months after she first left the mission home she returned to find letters waiting for her. They were sent by the mission department back in Norway, insisting that she return to Norway.

Word had gotten back to Norway that Marie was using ‘unorthodox’ methods of evangelising, such as the laying on of hands! She had even been known to cast out demons just using the name of Jesus! Such news only made the missions committee more irritated at this ‘loose cannon’ they had wandering throughout China.

Before Marie could even address the letters, yet another emergency would arise and she would be gone again for months at a time. No one really knows how many kilometres Marie walked around China visiting home after home, holding countless Bible studies and prayer meetings. She saw healings and deliverances and many raised from the dead. She was never interested in numbers, but rather in true fruit. In fact, sometimes she would deny new converts be baptised as she wasn’t convinced of their true repentance!

This went on for 31 years! And she was there without financial support from her home.

Every year the letters from her missions’ department grew more hostile and demanding, sending her ultimatums. She felt torn: On the one hand the letters distressed her but on the other hand there was too much work to be done and she never swayed from answering every call for help.

Nevertheless, one day a letter arrived that made Marie reflect on her situation: Her parents were ailing. She knew she had to return to Norway to take care of them and leave her beloved China.

Cold welcome home, no acknowledgement or honour
With a heavy heart Marie left China in 1932 and sailed back to Norway. There was no welcoming committee waiting for her.

When she entered her church everyone gave her the cold shoulder as she had been ‘rebellious’ to the orders made by her missions’ department to return many years before. She quietly nursed her parents and sat in silence in the back row of the church. Then her parents passed away and Marie’s life quietly dissipated.

In 1961 Marie Monsen passed away. She died nearly penniless, nothing to her name but some notes of her time in China which later became a book. The church quickly buried her in the back of the cemetery and forgot all about her.

Appreciation – 38 years later!
In 1999 the Norwegian church received a letter from China announcing that a group of Chinese delegates were to come to Norway to show their appreciation for the work this mission had done in China. The new young pastor was baffled.

The Chinese delegation arrived and said: ‘We’d like to see Marie Monsen’s tomb so we can show appreciation for her work in our cultural way.’

The pastor scratched his head – he’d never heard the name. This did not please the Chinese. He quickly called an elderly member of the church and asked her if she knew the name Marie Monsen.

‘Oh yes.’ replied the elderly woman. ‘She went out to China and would never come back. She made a lot of people very angry.’  The pastor asked if she knew where she was buried and was told it was in the very back of the cemetery, overrun by weeds.

Marie’s name was barely visible, having been hand chiselled. The Chinese delegation was not impressed! In fact, they were shocked!

The main speaker for the group asked the pastor to call his congregation together. Everyone came obediently, but baffled – they had no idea who these men were or what they wanted.

Mother of China’s House Churches
When the church was filled the Chinese leader got up to speak. His first words were: ‘Did you know who you had among you? You had the “Mother of the house churches of China” among you. Yes, Marie Monson was our mother in Christ. I would be dead if she hadn’t come to our home and prayed for me with such faith and tenacity. I was brought back to life and now am the leader of our denomination.’

The Chinese men took turns in telling the stories Marie never had a chance to share with her congregation. By now there wasn’t a dry eye in the church. Everyone felt convicted and at the same time moved by the stories they were hearing.

Finally the delegation said to the church: ‘We will return in two years and by then we hope that you will build a proper headstone to Marie.’ They even offered to leave a donation but the Norwegians refused. They were eager to do in death what they hadn’t done in life, honour Marie Monsen’s memory.

Sure enough, the delegation returned. And this time they were very pleased to see a monument properly done and in a prominent place to the ‘Mother of the house churches’ in China.

How many other forgotten heroes of faith out there today?
I wonder, how many disciples of Jesus Christ are out there, forgotten by the church back home, but making a marked difference in the kingdom of God? How many precious men and women of God are sacrificing comfort, wealth, security, safety to reach one more soul in the most inhospitable places?

Sometimes these people are misunderstood because they don’t fit the ‘mould. ‘

People have certain perceptions of what missionaries should look like or should be doing, but God has no mould. Each one has been given a task and sometimes they are more effective outside the mould. Like one missionary sent to a closed country – he couldn’t build a typical church there or preach the gospel openly, but he happened to be a judo expert. The Lord led him to offer his talents to the Ministry of Defence first of all, and through that open door was allowed to start ‘judo’ classes for the police force all over the nation. He still doesn’t have a church ‘building’ but the church is there.

Today nearly two thirds of missionaries are not from Western countries. Their stories are truly inspirational! Only eternity will tell what these heroes of the faith have done without media attention, without church recognition but purely for the love of the Master!

God hasn’t forgotten them
Most of them wouldn’t want earthly rewards anyway, they are like the heroes of the faith found in Hebrews 11… and the world is not worthy of them!

The Heavenly Man‘s Liu Zhenying aka Brother Yun, an exile from China and devotee of Marie Monsen, has written: ‘Miss Monsen was small in stature, yet a giant in God’s kingdom. The Chinese church was not only impacted by her words, but also deeply challenged by her sacrificial lifestyle. She was a fully committed, uncompromising follower of Jesus Christ, who showed us an example of how to suffer and endure for the Lord.’

In remembering unsung heroes who reach out to a world in need, may we be aware of our own calling to follow Jesus and contemplate on Hebrews 11:31, Message:  ’ …that their faith and our faith would come together to make one completed whole, their lives of faith not complete apart from ours.’

Erica Grace is author of Foundations for the Family, a biblical teaching series suitable for whole congregations. Warmly welcomed itinerant ministers, she and her husband, Chris, are also on the ACC Multinational Pastors Team, Victoria. Links: sevengraces@bigpond.com / (041) 270 2945