‘Can you please tell me which is the best English version of the Bible?  A friend told me that the best is the KJV (King James Version), but I find it difficult to read.  Is it okay if I read a more modern version?’

Firstly, all the earliest manuscripts we have today are copies of the originals – we do not have one original handwritten copy – or even a small portion – of any of the books of the Old or New Testaments.

Faithfully copied handwritten copies
We do, however, have a number of excellent copies that faithful men have hand-written over many centuries. There are some minor variations in many of those copies, but none that in any way changes the message of the Bible. 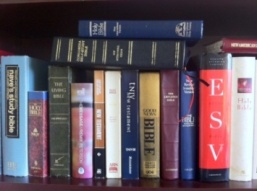 Our English versions are ‘translations’ from the original Hebrew (and Aramaic) Old Testament and Greek New Testament.  It must always be remembered that even the ‘best’ translation is, at best, only a translation!

A word-for-word translation would be unreadable because of the different structure of the languages!

Not only that, but some words and phrases in one language are untranslatable or meaningless in another; for example idioms are usually meaningless if literally translated.

For example, in Jonah 3:9 the phrase that refers to God’s ‘fierce anger’ in both the KJV and NIV literally means ‘the heat of his nose’!

Translators often have to use words or phrases that, in their judgment, best explains the meaning of the original. Then there is the fact that living languages change. Words can become out-dated or even change in meaning. Something is always lost in a translation!

There are basically three types of Bible translations

Other translations, such as the NIV, use a combination of ‘Literal’ and ‘Dynamic Equivalence’ methods.

Let’s now consider the matter of the KJV
Without doubt the KJV rightly holds an honoured place in the English speaking world. In 2011 it celebrated its 400th year from its first publication.  It has been an inexpressible blessing for countless millions of people. Furthermore, as it was written at a time when the English language was at its most beautiful, as a piece of literature it is unsurpassed.

However, since the KJV was first published many thousands and significantly older manuscripts have been discovered. Secondly, words and phrases which meant one thing in 1611 often mean something totally different today.

Also some words are clearly mistranslated; for example the KJV refers to unicorns (which never existed) nine times! Thirdly, the KJV has been revised three times since 1611, so there is not just one version of it.

Is there a perfect translation?
No! In order to have such a translation three things (at least) would be required:

So, which translation is the best?  There is no simple answer to that question. I recommend that you use a modern translation.

It is sometimes argued that behind modern translations there is a conspiracy to corrupt the true word of God. This allegation is quite wrong and, unfortunately, some over-zealous defenders of the KJV have made false and mischievous statements about some scholars and some translations.

A favoured Bible among many Christians today is the NIV and I would suggest that you use that as your principal translation.

But most important of all is that you actually read whatever translation you have!

Only then will you discover that ‘All scripture is God-breathed and is useful for teaching, rebuking, correcting and training in righteousness’ (2 Timothy 3:16) and that ‘the word of God is living and active. Sharper than any double-edged sword’ (Hebrews 4:12).