There’s a tale that’s been around since my Sunday school days – an unsourced homecoming story that’s been told and retold over the years in various ways. Basically it goes something like this…

A missionary couple, old and wearied, was returning home to the States to retire after toiling many years in what we were told back then to capture our imagination was ‘Darkest Africa.’ Not overly successful in their missionary service they were unknowns compared to such ‘greats’ as Dr David Livingstone.

But they’d been faithful to their calling and had shared God’s love and the gospel of Jesus in many caring ways. They had reached to neighbours – strangers – not only to preach but to help in practical ways. And they would pray for the sick and needy and witness miracles – and over many years had known the joy of seeing several indigenous people accept Christ as Saviour.

This couple had grown old together as they laboured on despite many difficulties, opposition from demonic forces, misunderstandings from locals including other ministries, and even lack of meaningful prayer and financial support from their church back home.

Discouragement
And now they were both suffering from ill-health, defeated mentally and spiritually and, having neither finance nor pension, they were feeling so broken, discouraged and alone and uncertain of their future.

As the ship carrying them home sailed into New York harbour the couple went up on deck to view the surrounding landmarks after so many years. They smiled for a few moments, then the husband’s head dropped and sadly he said to his wife, ‘Yes, it’s great to be back – but we’re all alone, no one will be here to greet us, to care about us.’ 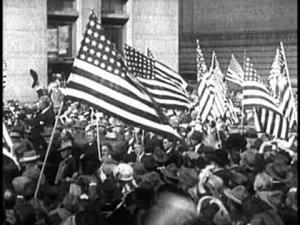 But after the ship docked and they moved to the gangway to disembark they had the biggest surprise – there below on the pier a large band was playing heartily. And the mayor, city dignitaries and crowds were gathered and cheering warmly in greeting!

Their hearts instantly lifted in delight: They couldn’t believe it: they had not been forgotten, they had been remembered! Surely they had a great rewarding future ahead! ‘Oh, we’re being recognised, darling’ the husband exclaimed, squeezing his wife so close, ‘and we thought no one knew us, no one cared.’

Suddenly his delight was shattered as the truth dawned on them both and more disappointment swept over them crushingly. They were hastily moved aside by the party behind them – the welcoming homecoming turned out to be for the man who now smilingly passed by them – President Teddy Roosevelt, returning from one of his safaris!

No one was paying attention to the returning missionaries.

Disappointment
Sadly disappointed, the man commented to his wife, ‘We’ve given our lives in faithful service for God all these many years and nobody cares about us, nobody knows. This man, great though he is, comes back from a hunting trip and everybody makes much ado over him, but nobody gives a hoot about us.’

Not concerned about her own disappointment, his loving and wise wife sought to encourage him not to feel that way but despondently he responded, ‘Can’t help it, I’m human. It’s just not right.’

Quietly they disembarked unnoticed and disappeared into the crowd, got a taxi and found a cheap unit in the city, hoping for a better tomorrow.

That night the man felt really broke up and said to his wife, ‘I can’t take any more of this!’ Wisely she suggested, ‘Why don’t you just go in the bedroom, be quiet, and tell that to the Lord directly, not me?’

He looked at her quizzically and sadly. Saying nothing he dragged himself away. It was only a short time later before he reappeared, his expression completely different.  ‘What happened?’ asked his surprised wife, ‘You’re so at ease, so different, so at peace.’

‘I told Jesus how bitter I was that someone received such a tremendous welcome home, when no one welcomed us, no one knew us. Then suddenly I sensed the Lord putting put his hand on my shoulder and saying very quietly, ‘But you’re not home yet!’ And Colossians 3:23 and 24 came to mind: ‘And whatsoever ye do, do it heartily, as to the Lord, and not unto men; Knowing that of the Lord ye shall receive the reward of the inheritance: for ye serve the Lord Christ.’

Joy filled their hearts and strong hope and expectancy of a much better tomorrow now filled their minds… they were indeed not home yet! The biggest welcoming was yet ahead.

Determination
As you’ll read in our Encouragement article this month, and in those by Tim Edwards and Mark Ellis, discouragements and disappointments are facts of life! They can hit any of us at any time. Had a phone call last night requesting prayer in respect of a good friend’s son regarding something unexpected that had happened; and a call a couple of weeks ago from the family of a pastor suddenly called to glory. Then there are a few challenges close to home…

Life is indeed life! Personally I repeatedly find myself returning to my two favourite scriptures –

I learned a long time ago to be determined not to be thrown when things go wrong out-of-the-blue; yet another of life’s challenges suddenly arises; even close friends don’t understand me; support is missing; encouragement is not being received; the way ahead seems fraught with danger and uncertainties.

Destiny
My key in overcoming discouragements and disappointment as I pursue my Jeremiah 29:11 backed destiny in Christ is to determinately rely on the above scriptures – and others such as …

Our calling to follow Jesus is one of pressing on (as shared in our Encouragement). Let’s hang on the truth that we have a God-given destiny to see completed – and move on boldly. 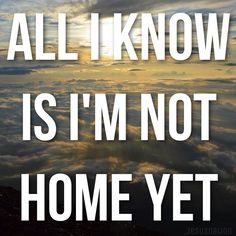 Even if we’re retired there’s still work to joyfully and willingly do for Jesus.

But don’t think ‘Darkest Africa’ –think locally! And no matter if others are unaware of our ministry, whatever cost we pay or hardships we may face.

Life and ministry are temporary assignments, destinies – we’re not home yet!