‘All Nations’ – this term ‘all nations’ occurs 72 times in the New Testament. The entire Bible has 452 direct references to all the nations in this world. This alone is substantial evidence of God’s interest in every nation on earth.

When you find that God’s word, the Bible, links ‘all nations’ with the eternal purposes of God, the birth of Jesus in Bethlehem and above all, the death and resurrection of Jesus Christ, the value of all nations to God becomes very clear.

The command of Jesus Christ to his disciples recorded in Matthew 28: 18-20 adds vital meaning to God’s love and plan for all nations!

He said, ‘All authority in heaven and on earth has been given to me. Therefore, as you go, disciple people in all nations, baptising them in the name of the Father, and the Son, and the Holy Spirit, teaching them to obey everything that I’ve commanded you. And remember, I am with you each and every day until the end of the age.’

A God-given but neglected goal!
This command, known widely as the great commission, has motivated hundreds of thousands through the centuries since Christ died and rose again.  The stories of their obedience, their sacrifice and their faithfulness have been written and widely read, generation by generation. This will continue to be so, until Jesus Christ comes again in the clouds to raise the dead and to establish his eternal kingdom.

All nations, as the goal of ‘making disciples’, has been misunderstood, forgotten, ignored, and disobeyed by the church far too often.

Sometimes the reason is fear, other times difficulty, distance, opposition and danger. There have been other reasons, but the reality is that there are still hundreds and hundreds of nations where there is –

Lack of concern and understanding compounds this major problem
God, as creator of all nations, has a purpose for each nation. He loves them, their uniqueness and above all, each man, woman and child. Christ died for them, atoned for their sin and purchased forgiveness and eternal life for each one who believes.

But, as Romans 10:14-15 reminds us, how can they believe, without a preacher and how can they preach except they are sent?

The term, ‘all nations’ seems to have not been understood by many Christians. So also is the term ‘unreached nations.’

I once spoke of the ‘unreached nations’ while with a large group of missionaries in Asia. One missionary leader said, ‘Everyone who is unsaved is still unreached.’

He made a good point, yet he appeared to miss the real point. I will repeat the description.  An unreached nation is a nation where there is –

Unless we understand that sobering fact we will fail – fail to pray for them, fail to reach them and fail to obey Christ’s command to go and disciple them.

Perhaps you are not clear on what constitutes a nation. The Oxford dictionary defines a nation as ‘A people or race distinguished by community of descent, language, history, or political institutions.’

Papua New Guinea, for example, has 842 defined people groups. India has 3,000 such peoples and still has the largest number of yet unreached nations, especially within its northern states.

Unreached nations must be seen, understood, prayed for and reached with the good news of Jesus Christ if we are to see his command to reach all nations come to fulfillment.

Realities the church must face

In all these places, the most effective witnesses are local indigenous people who are trained to start church planting movements! 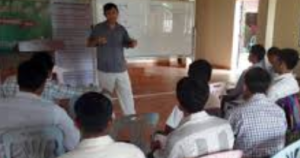 They are already making a significant impact for the glory for God.

And a great and effective door has opened for non-indigenous missionaries and experienced pastors to help with the training of this generation of church planters. And they can work in nearby countries or even at some distance in this valuable ministry.

Challenge
I stated earlier that God loves all nations – that they are value to him, that his plan of salvation through Jesus Christ includes every person in every nation.

The church of Jesus Christ must be involved in reaching all nations, especially unreached nations, if the great commission is to be fulfilled!

But when I say ‘the church’, I’m not using the term loosely as in ‘some church somewhere in the world’ – I mean your church, I mean every local church!

Does your church have a heart for missions? Do you?

Talk to your pastor, check out mission organisations that are already zeroing in on their target to reach the lost, that are training indigenous workers and pastors.

And, above all, ask the Lord how you can assist personally…

Go… disciple people in all nations!