Recently I received a blog from an Indian friend who is pastoring in India: a young man whom I taught for a short time in a Bible college in Tamil Nadu. He was very committed in his Christian faith and very passionate in sharing the gospel.

However, his most recent blog troubled me. It was titled, ‘God wants you to be rich!‘

The following is part of what he wrote:
Yes, God wants us to be rich. We all know and believe that Jesus Christ, our Lord and Saviour, died on the cross to buy our salvation, healing, blessings and deliverance; but I want you to know on the same cross Jesus also died to make us rich.

‘You know the grace of our Lord Jesus Christ, though he was rich, yet for your sakes he became poor, that you through his poverty might become rich’ (2 Corinthians 8:9 NKJV).

Concerns
He did finish his blog with a qualifying comment: ‘I am not encouraging you to be greedy but to seek God and his complete will for your life!’

Nevertheless as I considered what he had written, two things prompted me to respond…

This is what I wrote:
I have been reflecting on your blog. I have to say that it troubles me. Despite the arguments of the ‘prosperity gospel’ preachers, God nowhere promises material wealth to his followers.  Jesus said concerning himself, ‘Foxes have dens and birds have nests, but the Son of Man has no place to lay his head’ (Matthew 8:10-20; Luke 9:57-58).

Jesus was saying that effectively he was homeless. The fact is that Jesus was not ‘rich.’ He was not part of the wealthy segment of society nor were his disciples ever wealthy.

The disciples discovered that there was no earthly glory in following Jesus, no palaces in which to live and no riches in which to delight. Instead there was for most of them persecution, poverty and death.

When Jesus said that he had no place to lay his head, he was not stating that being wealthy was a sin and he was not calling everyone to live in poverty. But it must also be noted that he never, ever, promised material riches for his followers.

Furthermore, Paul gave this clear warning, ‘For the love of money is a root of all kinds of evil. Some people, eager for money, have wandered from the faith and pierced themselves with many griefs. But you, man of God, flee from all this, and pursue righteousness, godliness, faith, love, endurance and gentleness’ (1 Timothy 6:10-11).

It truth, Christians are already indescribably rich. As Christians we already enjoy every possible spiritual blessing. We are the richest people on earth through Christ.

The late Leonard Ravenhill wrote, ‘If material things are what you’re talking about when you say “I’m blessed” then you have no idea what real blessings are.’ Also, John Piper has accurately observed, ‘Prosperity cannot be a proof of God’s favour, since it is what the devil promises to those who worship him.’

I want to thank you for being honest and sharing your thoughts about a previous blog. I understand what you after trying to share and help me understand.

I believe when Jesus was on earth, he wasn’t rich; I agree he didn’t have a place to stay… But, how do you explain this verse in 2 Corinthians 8:9? The Bible says he became poor, so that we who believe in him might become rich.

I also believe ‘blessed’ is not just wealth, money, but it’s Jesus!  Well sir, I will read the blog again and ponder about it and will make the changes needed! Thank you so much for the light of your insight and wisdom, I really appreciate with all my heart. Glad to have your voice over my life!

My answer:
I was pleased that he received my response in a receptive way! And I wrote again in answer to the question he asked:

Thanks for graciously reading what I wrote to you. Obviously I do not want to offend you, but in love for one who was my student for a short time, I felt compelled to write to you to redirect you.

You made reference to 2 Corinthians 8:9 –  ‘For you know the grace of our Lord Jesus Christ, that though he was rich, yet for your sakes he became poor, so that you through his poverty might become rich’ – and asked for an explanation.

This verse is making three fundamental statements, first Jesus was rich, secondly, he became poor and thirdly, he made us rich. So, let’s deal with these three statements.

(i) Jesus, the eternal Son of God was rich in that he had everything! He was rich in power, majesty and glory.

(ii) Jesus at his incarnation became ‘poor’ when he laid his glory and took on himself our human nature with its weaknesses and limitations.

(iii) Jesus, through his obedience to the Father in dying for us and rising again from the dead, reached out to us to make us rich in God’s love, grace, forgiveness, and power. We are also rich in the abiding presence of Jesus Christ, his wonderful promises and his assurance of a glorious eternity! We are the richest people on the planet – and that wealth is not, and never can be, measured by the amount of money and property we possess.

Beware of heinous peddlers of God’s word!
We must avoid the temptation of thinking of ‘riches’ in terms of material wealth. Of significantly greater value are the unsearchable riches of Christ’ (Ephesians 3:8).

I’ve quoted this correspondence because it shows a beautiful graciousness in the response of one who received a criticism (albeit a valid, loving and well-intentioned one).

But I also quote it to share a warning of a heinously false teaching that continues to be foisted on unsuspecting Christians today by some unscrupulous ‘peddlers of God’s word’ (2 Corinthians 2:17 ESV). 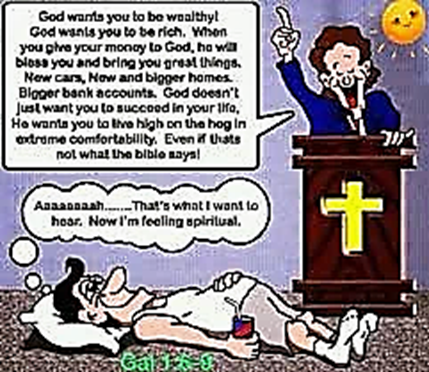 Paul gives good advice: ‘Test everything. Hold on to the good’ (1 Thessalonians 5:21).

Recommended is his enlightening Looking for Answers in a Confusing World, available in electronic version in EPUB, Kindle and PDF formats with hyperlinks and offered free. Link for orders and questions: jbmcclure@gmail.com