1, Tentmakers in mission
A respected and decisive part of missions in the 20th century was filled by ‘tentmakers.’ I expect that time will prove that this support to long-term ministry missionaries has continued into the 21 century.

The term comes from the Bible – Dr Luke wrote about Paul in Acts 18:3, ‘Because he was of the same trade, he stayed and worked with them; for they were tentmakers by occupation.’  These were men and women using their professional skills in self-support, as they worked as much as their time permitted while fulfilling the ministry God had given them.

2. Business in mission
Committed Christian business men and women have actively supported the work of missionaries serving overseas for a long time. Their ability to raise and give significant levels of financial support has been a greatly valued factor in modern missions.  I expect that research of the centuries gone would prove this statement, repeatedly.

I write here about the value of ‘Business in Mission’ in this time. It has been my privilege to work with some of them and to see their dedication, faith and fruitfulness.

Some of these servants of God have used their business to support long-term missionaries initially, then moved to a new approach as they have given considerable time to ‘training’ national believers to set up indigenous business enterprises for the glory of God.

Others have even related to the mission field area, where their ‘training’ ministry has become virtually full-time. At the same time their wise investments back in their home country continue to provide financially for them and for their work for God on the field, also, for the support of long-term missionaries on the field.

3. Women in mission
Over the thirty years that I served God in mission leadership I related to many single men and women who served with excellence in their field of service. To my surprise, I discovered over time that women outnumbered men by about three to one. I should here add that when you add all the married women serving also as missionaries, the ratio is extraordinary. My purpose is not to just quote percentages or ratios, but to point out the great value of women in mission.

I realise that I am not fully qualified to define the differences between men and women!  However, I offer some thoughts within the scope of my experience… I was married to Nancy for almost 62 years, when she graduated to glory. I have two mature age daughters, five granddaughters and six great granddaughters. I love them dearly and thank God for them daily. From my association and experience with all these women I have some understanding of the value of feminine qualities!

Women in mission add qualities, attitudes, inherent abilities and commitments that are theirs to give. I know that to say they are different to men is obvious… however, I mean in the context of the ministry of a missionary.

4. Changes in mission
Twenty years ago, I would not have dreamed of writing on a theme such as The Future Role of Western Missionaries. I would have said, ‘They have a role in every era’ or words to that effect. I had worked actively with hundreds of western missionaries in thirty countries and believed they had a long future ahead.

Over this extended time ‘western missions’ has changed greatly. There are some changes that I do not have space here to describe in detail… but the following are some observations –

I readily accept that new missionaries from Africa, Asia and Latin America will require support, sometimes in the higher range. However, my experience leads to the view, that frequently their budgets are more modest, and they have advantages in language learning. Admittedly that is not always the case; however Asian missionaries particularly adjust more quickly to other Asian languages and cultures.

Please understand that I am not here thinking of experienced and proven western missionaries, but rather, new young applicants, who believe they are being called to missionary service. I have met, interviewed and participated in the process of the applications for service of hundreds of them. Their sincerity, commitment and preparation for service are usually excellent. 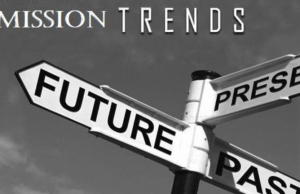 But sometimes it requires several further years of Bible and cross-cultural training before a first year on their field of service attending a language school. It is now my view that young applicants should gain much more ministry experience and further advanced training. If they believe God is calling them beyond all doubt, to another part of the world they should aim and prepare for a role in the training of the emerging generation from the rest of the world.

Novices are not needed, however, men and women who know the Lord, and are known for their ministry and commitment and experience should be embraced. But only, if they know God is calling them to this new task for them.

I believe that the pre-field training of these proven ministers of the gospel and teachers of the word of God needs to be more welcomed. They are not novices; their gifts and experience are of decisive worth in the training of indigenous missionaries.  Learning to be a mentor/coach is an essential area of preparation. At the same time, I believe that there is need for a new understanding by the sending churches and agencies and by the receiving national churches.

I suggest for consideration by mission agencies that –

When one considers that their task in this era may not include much public ministry, but rather, behind the scenes tutoring and mentoring it seems wise to look at the language learning phase as better in their home setting while they are still employed, at least part-time.

There are good language teachers and programs in Australia. Depending on the language needed, there may be some challenges. Online language learning is becoming more popular over recent years.

Matthew 28: 19 challenge remains current today!
Obviously, God’s calling, guidance and anointing are primary in every life called to mission. I have shared my heart to hopefully encourage those who sense God’s call to prepare themselves and win their ‘spurs.’

Those who have a clear call of God, a commitment for the long haul and a heart for the unreached peoples, will be guided by the Lord to the place of his appointment. I encourage those who are beginning their service for the Lord, to train well, serve wherever God opens doors and be patient until the Lord guides you, if that is his will, to the ends of the earth.