(March 04, 2020) Alistair Pitman shares from his heart how God helped him through stages of grief over losing his late, first wife, Dorothy…

One of the hardest points in the grieving process came around the second month after Dorothy’s passing in 2014. I had been missing sharing with her all that doing life together involves.

Immense grief
I’d also been missing the depth of Dorothy’s love for me, accepting me regardless of my faults and weaknesses!

I had not realised how much I had taken Dorothy’s love for granted. It was always there – I just didn’t realise

how great her love for me was until it wasn’t there anymore!

It was her special gift to me, and I really wrestled with this reality. Even close friends couldn’t replace what I was missing. The depth of sorrow I was experiencing was immense… but it was from this place that God really ministered to me.

I went out for a run one day, mulling over how much I missed the depth of Dorothy’s love. Later I arrived back at my driveway still thinking about grief and its various stages.

Suddenly I experienced God’s manifest presence in a powerful way!

And I did! I… ‘just’ let go. The ‘blanket’ lifted as the weight of missing Dorothy’s love dropped away! The absence of her love for me was filled by the comforting Holy Spirit as I was released from a troubled mind. I still missed Dorothy of course… but the depth of that anguish and sorrow had left.

This encounter brought a whole new meaning to John 14:26-27(NKJV): ‘The Helper (Comforter), the Holy Spirit… will teach you all things… Peace I leave with you… Let not your heart be troubled.’

The Holy Spirit is truly my comforter and he has continued to help me in so many ways since.

Reality
I’d been warned that six to seven weeks after Dorothy had gone reality would start to set in – it did!

Life goes on for everyone… and naturally support of family and friends lessens. Although the reality of Dorothy being gone was heightened, one thing I knew was that God was still with me and the children. 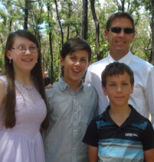 We were open and honest as a family and Kalani, Jayden and Kelby (left 2015) continued to do amazingly well through all of the events during this time.

They appreciated being able to move on without having to regularly explain how they were coping. Their faith became stronger through this whole experience; God helped all of us win through!

The final words Dorothy had journalised before entering eternity were: ‘Bless my family Lord; Alistair, the boys and Kalani.’ He did – and continues to do so!

But… allow me to share some of what I learned about grieving, going back even before Dorothy’s passing…

The grieving process
My understanding of this process grew as I examined what the Bible says, as well as other resources. I needed to understand so that I could help both myself but my children. What I came across was extremely helpful and showed me that God can use even grief to help shape us.

Grief speaks of hurt, pain, vexation – what I was feeling. In my case it wasn’t a process that started when Dorothy died, but two years previously when she was diagnosed with a brain tumour and needed immediate surgery.

My grieving really started and different stages began to manifest.

1) Denial and isolation
I was in a place of denial. I honestly thought Dorothy wasn’t going to live more than a few weeks; if she would even make it through the surgery. The thought of ‘This can’t be happening to me’ was very real.

Because I didn’t want people pitying me, I pulled out of morning meetings at school. Running became my lifeline and as I started to become honest with myself about what was happening, I started turning to God for answers.

2) Questioning God
Big questions directed at God were such as:

Job’s story was the only thing I could really hold onto. Verses that stood out to me in relation to my questions towards God were Job 1:20-21NLT where, on learning that he had tragically lost family, servants and livestock, ‘threw himself face downward on the ground. He said, “I was born with nothing, and I will die with nothing. The Lord gave, and now he has taken away. May his name be praised!”’

Job was grieving over his great loss… yet in spite of everything that had happened he worshipped God. ‘He did not sin by blaming God’ (verse 22).

Job 13:15NLT also grabbed my attention: ‘I am going to argue my case with him.’This ‘arguing with God’ became a reality.

3) Anger and frustration
I had to deal with this! Taking a lot of my anger out on the soccer pitch I had become increasingly aggressive and playing hard.

One day an opposition player and I were both running to get a loose ball. He raised his arm and elbow towards me, so I went into protection mode curling into a ball and hit him with my back. He went down hard.

Not happy he jumped up and shoved me! I didn’t really budge… but I was very angry and shoved him back and he fell over. We were both pulled over by the referee and I was told, ‘You can’t retaliate like that!’ Given a red card I had to leave the pitch.

The following week God really spoke to me! A flow of thoughts, best described as a still, small voice within: ‘Alistair, you have been taking your anger and frustration over everything that has been happening with Dorothy out on others on the soccer pitch. I don’t want you to do this anymore. I want you to take your anger out on me.’

Now this was amazing to me – I’d been taught to behave respectfully and reverently towards God. But when I considered Job 13:15 and looked at how the psalmists poured out their heart to God; I knew this was what he wanted me to do.

Anger was a very real part of the grief process in my life and God showed me how to deal with it. I learned to call it ‘honest prayer.’ Venting my anger on God – openly revealing my heart to him – was being real!

4) Bargaining
Another stage of grief I went through over those previous two years relates to bargaining. For example, ‘Lord if you heal Dorothy, I will serve you the rest of my life.’

However, although Dorothy did die, my resolve and commitment to serve God was so strong and still is.

As I said at the celebration service, ‘God owes me nothing but I owe him everything. God is still good even though Dorothy has left this life. My family is in God’s hands… no deals made. I have given my life to God regardless of the outcome. We are so grateful and thankful for our time with Dorothy!’

5) What ifs
Here’s where one asks questions such as: What if…

This was an area that Dorothy and I both came to agreement on months before she died. We recognised that through her suffering God had brought us closer together, to our children and more importantly to himself.

We had no regrets… both agreeing if given the option of not going through this we wouldn’t take it because the number of lives God is able to minister to through one person’s pain and suffering, including our own, is massive – in our case the ripples still go on!

6) Sadness, sorrow, anguish
Another stage which the children and I were experiencing in the months after Dorothy’s death!

Even the sheer weight of the practical implications of dealing with death such as the celebration service –and paperwork such as changing car and house ownership… strongly brought home the fact that Dorothy had left this life.

7) Past memories
This was biggest area of grief that the children and I were dealing with in those first six months.

But they actually became a key component to coming to terms with things. Instead of crying every day, as in the first two months, I

would cry once every three days or so in the next few… but they were not tears of depression, rather they flowed from precious memories.

The key for us continuing to work through all of this was recognising and receiving God’s help day by day.

For me this was something that I’ve been able to accept a little more readily because God used me to speak to Dorothy in such a powerful way in the final moments of her life on this earth. To communicate to her on God’s behalf, ‘Well done good and faithful servant. Enter into the joy of the Lord’ – and then to witness her breathe her last and leave this life.

Grieving is necessary… as is moving on
The biblical reality is that it is normal and necessary to grieve. Then we must move on, away from stages such as mentioned above.

I didn’t have it all together back in those early months, but I do know this: God shaped and fashioned the children and I through grief and we are stronger today. I know that I am growing spiritually daily and all I want to do is pursue God more and more.

A new chapter had opened in our lives and today we continue to move forward with faith, hope and love in our hearts.

If you’re experiencing grief I encourage you to seek good counsel and, above all, the Lord Jesus… and to discover the comforting Holy Spirit.

A new start!
Naturally the memories of Dorothy as wife and mother will ever be with us… and our journey has been helpful to others. I even wrote a book based on our experiences, spiritual hunger and suffering – Why God, Why?*

And… God is ever gracious! He led me to meet Kathy in December 2015. Mother of Loryn, Nathan and Tayla, Kathy had gone through her own grieving. From a common ground of sharing and caring, we fell deeply in love and were married in December 2016. 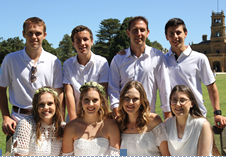 Comforted and led by the Holy Spirit, Kathy and I found a new love that’s all our own, precious and so special! And as a blessed family we’re all moving on together… following Christ Jesus.

Alistair Pitman is a teacher at Plenty Valley Christian College. He and Kathy fellowship at Mill Park Baptist Church where Kathy is Families and Worship Pastor.

* Link: Copies of Why, God, Why? (and questions) pitofgold@optusnet.com.au.