In recent weeks nation after nation have been imposing lockdown measures on their citizens to help prevent the spread of the deadly Coronavirus.

Some of those measures have frustrated and, in some cases, angered a lot of people worldwide.  Yet most have responded stoically and have accepted that while, frustrating and depressing, lockdown is necessary for the life and health of millions of people worldwide.

‘Lockdown’ isn’t some new method!
‘Lockdown’ is also a method of control that throughout history national regimes and political ideologies (for example, communism and extreme racist or authoritarian systems such as Nazism) have imposed as a technique of political control.

What a relief and what joy when the lockdown is over! This is what the world is hoping for: Christians are praying for!

This week I have been reflecting on another ‘lockdown’ that happened 2000 years ago and how great has been the joy ever since when it was over.

When Jesus died on the cross on the first ‘Good Friday’ and was placed in the tomb, his followers were greatly distressed and grief stricken and some were even bitterly disillusioned as they were convinced that he was the promised Messiah – but his death appeared to put an end to that hope. 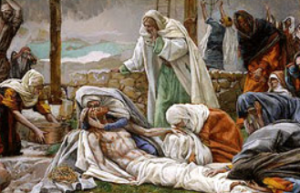 Hope placed in lockdown
The burial of Jesus and all the promises he made and the hopes he had nurtured were placed in ‘lockdown’ – the stone that sealed the entrance to the tomb was the ultimate authentication of the end of hope.

Luke’s account of the journey on the road to Emmaus by the couple to whom the risen Christ appeared on the Day of Resurrection expresses the profound sense of disappointment and sorrow they felt. For some reason they did not recognised him.  ‘He asked them, “What are you discussing together as you walk along?” They stood still, their faces downcast’ (Luke 24:17).

They went on to say, ‘… we had hoped that he was the one who was going to redeem Israel’ (Luke 24:21). They ‘had hoped’ but now no longer hoped! Jesus had died and he had been in ‘lockdown’ in the tomb for three days. To them hope had gone!

Lockdown was over!
But the reality was that after three days Jesus’ ‘lockdown’ was over! 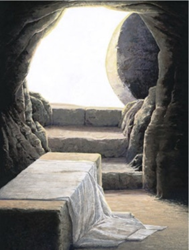 ‘See the empty tomb today,
Death could not contain Him;
Once the Servant of the world
Now in victory reigning.
Lift your voices to the One
Who is seated on the throne.
See Him in the New Jerusalem
Praise the One who saved us.’

When the risen and victorious Jesus Christ rose from the dead and rolled away the stone, he was declaring not only was his lockdown over but so too was our spiritual lockdown. Our glorious hope was reignited.

So we can shout a loud ‘Amen’ with Peter who wrote, ‘Praise be to the God and Father of our Lord Jesus Christ! In his great mercy he has given us new birth into a living hope through the resurrection of Jesus Christ from the dead’ (1 Peter 1:3).

Lockdown is over!  Hallelujah!