Many years ago in Sunday school in Ireland I – and many others – used to sing the following song:

In recent days this song has been in my mind one again, especially the lines – ‘Red and yellow, black and white, All are precious in His sight.’

Everyone matters!
The graphic video of the killing of George Floyd by a police officer in Minneapolis was alarming to watch and no one can condone that vicious act of brutality.

Sadly, however, the reaction of many people has been to aggravate the situation and, under the pretence of taking the high moral ground, they have resorted to law-breaking, violence, lying and looting.

Their current slogan, now declared with stubborn aggression, is ‘Black Lives Matter.’ I wholeheartedly agree that black lives do matter because – 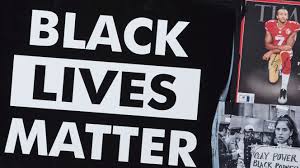 If the followers of the  Black Lives Matter movement were truly concerned about ‘black lives’ why are they totally silent regarding the thousands who are being persecuted and killed worldwide every year, for example, the  2,983 Christians killed in northern Nigeria in 2019?

BLM is not at all concerned about racial harmony or social justice or creating a harmonious society, but is about social disruption and revolution.

Protest marches and rioting are presently the preferred method of grabbing people’s attention and promoting this malevolent plan.  By selectively taking some facts, some figures and some incidents, the supporters of BLM then interpret them in ways that advance their goals. Other facts that do not support their purpose are conveniently ignored.

Take the George Floyd incident, for example…
If the killing of a black man by a white policeman in America demonstrates that white policemen generally are hostile to black people, can white people claim that the recent killing of the white Australian woman, Justine Damond in Minnesota by a black policeman, Mohamed Noor, is evidence that black policemen hate white people? Obviously not!

Or does the fact that police shoot more men than women demonstrate that policemen are more bigoted towards men? Again, obviously not.

Let me be clear – the violent death of anyone regardless of race or gender is disturbing and even more so if that person is wholly innocent of any crime or violent act. But to use those deplorable incidents as an excuse for increasing violence, destruction and civil disobedience is unjustifiable.

In recent days we have seen how effective the promotion of this radical and divisive social programme has been with American politicians, sportsmen and sportswomen, actors and numerous others (including the politically-correct administrators of the AFL in Australia) who are ‘taking the knee’!

What does this act signify?   Historically the act of ‘bending the knee’ was a formal act of surrender and submission and an acknowledgement of the superiority of the one before whom one was bowing.  It is alarming, therefore, to see political leaders and others kneeling in submission before a godless and destructive social fallacy.

How much wiser to follow the advice of the psalmist who wrote: ‘Come, let us bow down in worship, let us kneel before the Lord our maker’ (Psalm 95:6).  He alone deserves this act of reverence and submission.

Time for truth-telling
That Marxist agenda that has been so enthusiastically and graphically reported has also been vigorously advanced in Australia with the aid of a left-leaning media that promotes the narrative of aboriginal suppression since the arrival in 1788 of the First Fleet of British ships at Sydney.

The picture being presented is that Australia’s ‘first people’ have consistently been subjected to slaughter, suppression, slavery and injustice and that now is the time to right that wrong!

However, Alice Springs Councillor Jacinta Price (who is aboriginal) has written an article ‘to provide the overwhelming evidence that demonstrates these accusations are lies.’ She concludes by stating, ‘… a narrative that claims to try to stamp out racism but applies racism in doing so and encourages a racist over-reaction. Yes, it’s time for some truth telling.’ (It is interesting that the Australian news media are generally wholly uninterested in an aboriginal voice that runs counter to the narrative they want to tell).

Masked pretences
The BLM anti-social agenda is generally masked under a pretence of having compassion and identifying with the needs of the disadvantaged and those who are being victimised in various ways. It denounces ‘police violence’ but encourages rabid public violence, it condemns racism while promoting it, it demands the right to be heard while abusing the opinions of those who disagree. Lies have replaced truth. Hatred has replaced love.

As Jacinta Price has commented, ‘We have been hoodwinked into believing that somehow reconciliation means appeasing the aggrieved, those who refuse to forgive, and we are held to ransom every time the goal posts are shifted.’

Values turned upside-down
Daily on television we witness a graphic portrayal of major reversals of moral values. There have been many times in history when this has happened.

For example, in Isaiah’s day the prophet challenged his own people with these word, ‘Woe to those who call evil good and good evil, who put darkness for light and light for darkness, who put bitter for sweet and sweet for bitter’ (Isaiah 5:20).

As Christians we are called on to pray for our nation and its leaders. And we need always to remember that ‘God treats everyone on the same basis.  Those who fear him and do what is right are acceptable to him, no matter what race they belong to’ (Acts 10:34-35 GNB).

‘Red and yellow, black and white, ALL are precious in His sight.’