How often have the words of a song been used to speak to our hearts and or our experience?

In this short meditation I feel led to share some personal reflections sparked by the memory of a song with the above line, reflections that take me back over the years. I’ll come to the song a little later but let me begin by sharing something of my life…

A historical reflection
From I was a young boy I enjoyed reading – and one of my favourite topics was history. When I was growing up, the series Ladybird Books were readily available: written simply and concisely they gave young minds a sufficient background – or maybe appetite – for a topic.

It was these little books that introduced me to the growth of the Roman Empire including how it spread to England and of course, central to that is the construction of what we call Hadrian’s Wall, built to provide security from invasion from what we now know as Scotland. The need for the wall no longer exists but although it is now mostly in disrepair, the wall continues to be a popular tourist attraction.

A musical reflection
In my early teens I gave my life to the Lord. At that time I was already interested in music and sang in the church choir… but now I entered a new experience. With some other young men, we formed a ‘gospel group’ (as they were called then), playing guitar and drums as musical instruments and singing gospel songs.

In those days we would travel to many places in Northern Ireland, bringing the gospel message in song at gatherings of young people – often called ‘coffee bars’ (so-called for what I trust are obvious reasons!).

Evangelists in young people’s work would invite us to sing at outreach events, and we also took on engagements of our own to include speaking at church youth fellowships or other events. I particularly recall some great mid-to-late ’60s times ministering with good friends Alfie (gifted in moving in prophecy even in his teens) and Philip (who had and still has an evangelistic/ministerial calling).

Of course, over the years, some changes took place: for example Philip (Later the Reverend Philip Campbell) left to go to Bible college in England. But we caught up again when he began working with an evangelisation organisation and would sometimes ask us to sing at young people’s events.  Philip recalls those times as ‘special memories indeed… we had the privilege of ministering to many people and how we pray that lives were touched for eternity.’

Over the years I have continued to be involved with gospel music, forming a singing duet with my wife Eveline which for many years led us to a ministry of music and for me opportunities to share God’s word.

Currently I’m a member of the church music team… and, Philip, Alfie and I still have opportunities to play together.

A troubling reflection
Much of the activity I have shared with you took place against a background of that period in Northern Ireland from 1969 usually referred to as ‘the troubles.’

It was not unusual to be travelling home in the dark and find ourselves coming to a checkpoint manned by armed soldiers who would ask us what we were up to.

equipment and amplification to have it searched.

One of the songs we included in our repertoire in the darkest of those days was Jesus Take a Hold (attributed to Merle Haggard and The Strangers circa 1970). The words of the first verse say –

‘Like the ancient Roman Empire this world is doomed to fall
and it’s much too big a thing for mortal man,
just take a look around and see the writing on the wall,
somehow we’ve got to find a helping hand.’

‘The mighty roar of gunfire is now a local sound
and our city streets are filled with angry men,
law is now a mockery throughout our troubled land
and destruction seems to be the current trend.’

Unfortunately we knew the reality of that tragic experience in various ways, for example in 1972 the building in which I was then working was the target for destruction by a terrorist bomb.

Praise the Lord we were able to evacuate and were spared from injury or worse, unlike some whose experience in other incidents ended in awful injury and or death.

Those lines from The Strangers’ song above about falling empires, destruction being the current trend, and ‘somehow we’ve got to find a helping hand’ came back to speak to my heart about our world’s current experiences!

In our current situation with the impact the Covid-19 has had across the world, I reflect on a God of great love and is ‘a helping hand’ and remains faithful to his children in every situation of life.

Now he does not promise us an ‘easy’ life, or exemption from difficulty, sickness, or even tragedy, but… he walks with us in every experience!

I respect the many different views that sound believers may express in these days and I do not intend to take issue with anyone, but…

I believe as the words of the song I mentioned earlier say, the old Roman Empire has gone, as have other
empires which men sought to build, and this world is doomed to fall one day. And I believe that this should
cause us to keep our eyes of faith confidently settled on God and his word.

A scriptural reflection
Hebrews 6:13-20 are encouraging scripture verses for all who have received God’s promises… and hope in Jesus Christ, our Saviour. Here are some brief words of encouragement taken from verse 19(KJV) – ‘Which hope we have as an anchor of the soul, both sure and steadfast…’

1. Which hope we have –
Speaks to me about prospects: If a person loses hope their prospects are diminished – but this hope is not in any human organisation, but in the person of the Lord Jesus! And I believe we realise it more when sickness or perhaps redundancy touches our lives.

2. As an anchor of the soul –
Speaks to me about stability: Through the Holy Spirit God’s word is an anchor on which we can fasten our souls in the storms of life.

3. Both sure and steadfast –
Speaks to me about certainty: Life has always been uncertain and for those of us who are older we may recognise this to a greater degree, especially with the last five months or so being a vivid picture of uncertainty. However, in the Lord Jesus as our Saviour we have the certainty of his presence and promises for life and being with him in eternity.

A challenging reflection
Trust my reflections above bless you, reader… but, one more thought: How does this closing scripture speak to you?

Jesus fulfills that direction from the triggering song above… ‘just take a look around and see the writing on the wall, somehow we’ve got to find a helping hand.’ 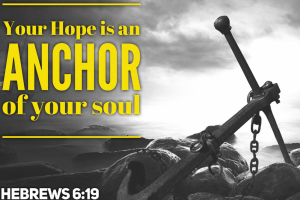 Our friend and Saviour Jesus Christ is the great ‘helping hand’!

Brian Bell is a diaconate member, Christ Church (Congregational) Abbots Cross, Northern Ireland, and a volunteer with Disabled Christians Fellowship Ireland. He describes himself as ‘grateful for the privilege and opportunity given me to serve my Lord.’ Link: brian.bell22@btinternet.com