I am using the word ‘gossip’ in the commonly understood sense of making derogatory and slanderous comments about other people.  While gossiping is endemic and ‘highly contagious’, it should find no place among Christians – but sadly it does!

Speaking against others
In his letter James made some pointed comments to the Christians in his day. He wrote, ‘Brothers, do not slander one another. Anyone who speaks against his brother or judges him speaks against the law and judges it’ (James 4:11).

The Greek verb which has here been translated here as ‘slander’ literally means ‘speak against’ and James used it three times in this verse.  The word can refer to slander, gossip, insult, or to talking in ways that are belittling or damaging to others, or even to hinting at something concerning another person.

The J B Phillips translation of these words incisively states, ‘Never pull each other to pieces, my brothers.’ Paul and Peter gave a similar warning to the Christians to whom they wrote (2 Corinthians 12:20 and 1 Peter 2:1).

Gossiping among Christians
Sadly, today’s Christians still need to hear and respond to this counsel.  Recently I was speaking to an Indian friend who had become a Christian.  He told me that the church he once attended held a weekly Bible study which he regularly attended as he had

a hunger to discover what the Bible taught. However, he was disillusioned with the meetings which spent little time on Bible study and much time in gossiping about other people who were not present.

Malicious comment or insinuation that seeks to highlight someone’s real or perceived inadequacies or failures is destructive.  Once those seeds are sown, they are difficult to remove. And how easily we can slip into the practice of engaging in gossip and slander!  It is something against which we as Christians must ever maintain our guard. When we engage in such talk about someone, we are not revealing a truth about that person – we are revealing a truth about ourselves!

When James wrote, ‘Anyone who speaks against his brother or judges him …’  he was making the point that there is a relationship between speaking against and judging a person because those who ‘speak against’ others are, in fact, assuming that they are acquainted with all the facts, are in a position correctly to determine the ‘guilt’ of the person being judged and have the right to expose their verdict!

One of the most unappealing aspects of our sinful nature is that we foolishly think that we are building ourselves up when we are pulling others down! Jesus said quite categorically, ‘Do not judge, or you too will be judged. … Why do you look at the speck of sawdust in your brother’s eye and pay no attention to the plank in your own eye?’ (Matthew 7:1,3).

Judging the ‘Royal Law’ as irrelevant
James went on to write that the person who speaks against others, ‘speaks against the law and judges it. When you judge the law, you are not keeping it, but sitting in judgment on it.’  The Ten Commandments (Exodus 20:2-17) are the divine law that God gave to Moses on Mount Sinai and they outline the core of spiritual and moral behaviour that God requires from his people. The first four commandments concern our relationship with God and the following six indicate how we should relate to one another. 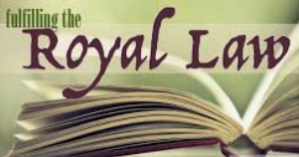 To understand what James meant in 4:11 in his reference to ‘the law’ we must go to James 2:8 where he quoted the words of Jesus, ‘If you really keep the royal law found in scripture, “Love your neighbour as yourself,” you are doing right.’  If we disregard this ‘royal law’, we are judging it to be irrelevant and are declaring it to be so by our gossip and slander.

A clarification
James 4:11 is to be understood as specifically referring to the practice of saying unkind and unhelpful things about others and spreading rumours about them to undermine and damage their character. The purpose of this ‘speaking against’ is to cause personal hurt and harm and it, perversely, gives pleasure to those who engage in it.

There are, however, occasions when it is right to alert others about dangerous people.  In the New Testament we see examples of advice being given concerning the exposure of those who whose influence is damaging or who misuse their authority or who misrepresent the truth.   For example,

What a powerful instrument the tongue is and how much we need to be in control of it!

What we say about others can build or destroy, encourage or dishearten, lift up or knock down, give good direction or lead astray, give a warning gloss over dangers.

What a responsibility we have, therefore, to be careful in what we say, about whom we say it, to whom we say it, how we say it and when we say it.  And how much we need the wisdom of God to help us!