(January 24, 2021) Mark Ellis shares how a snowstorm led to a pilot’s salvation…

‘I was a God mocker,’ says Mark Rose, founder of Genesis Alive, and author of Last of the Long Hunters, a story of the pilots who fly the Alaskan Arctic.

Raised in the secular Seventies, completely un-churched, he had no room for God until he ran out of fuel in an Alaskan storm, miles from his destination.

Rose learned to fly at 16, and by age 22 had become a bush pilot who helped take care of a fleet of helicopters that worked on the Alaska pipeline. ‘My ego meter was on 101,’ he admits.

Low on fuel
One day he flew some hunters to the upper part of a large river on the Arctic. But on his return flight, carrying one passenger, several things went wrong.

First, herds of caribou had moved in, covering his first and second choices for a landing spot. Then he began to run low on fuel, so he called ahead for a weather check at the small airport near Kotzebue, on the Baldwin Peninsula.

‘Come on in, the weather’s fine,’ the FAA flight service operator told him.

Rose decided to take the chance that his fuel would hold out, but then weather conditions changed dramatically. ‘I ran into a snowstorm at night, and I couldn’t see the terrain, so I had to follow the grey ribbon of river below.’ In the days before satellite weather imaging, the man had given him bad advice.

‘All my options were evaporating as fast as I could fly.’

Rose had several friends – fellow pilots – who perished in similar flying conditions. There must be a way out, he thought. I don’t want to die at 22. I won’t get to experience marriage…

He had been flying on empty for 30 minutes. Then the engine started missing. ‘I was just waiting for silence and to have to crash at night.’

God – the last option
Mark’s mind turned to his very last option – God. Rose had never prayed before, but in desperation, he lifted up a silent prayer. If there is a God, I need your help now.

Then a voice spoke to him that was crystal clear. Son, you said the right thing. After he heard the voice, Rose also experienced the sensation of ‘a light bulb’ that came on in his mind.

Immediately after his prayer, the plane popped out of the snowstorm! ‘Before me were the beautiful lights of Kotzebue – it might as well have been the lights of heaven,’ he recalls.

There was only one problem – he still had to fly another 20 miles over the Kotzebue Sound, a broad expanse of salt water north of the Bering Sea. 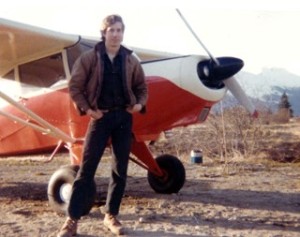 Mark standing next to his plane

‘That was a breath-holder,’ he says. When he landed safely at Kotzebue Airport, his humanist worldview collapsed. There was no earthly reason his plane should have travelled such a distance with no fuel.

Rose believes God added an hour of fuel to his tanks to save his life. ‘When I landed I was a different boy. I was not a Christian, but I was a believer in God.’

He thought about his grandmother, the only Christian in his family. So Gramma was right; there is something out there, he thought.

Falling in love with God
Mark started to date a Christian woman who challenged him to read the Bible for the first time. As he read the pages of scripture, something surprising happened. ‘I fell in love with the God of the Bible – his reasonableness, his forgiveness, his justice,’ he recounts.

But his stubborn heart was still not ready to make Jesus his Saviour and Lord. Then he had another brush with death in a helicopter that crashed, which completely flattened the seat he rode in.

About the same time, he missed a flight with some of the lead contractors for the Alaskan pipeline due to a schedule conflict. Shortly after the plane took off, it crashed, killing everyone aboard.

Later, on a flight to Fairbanks on a bush aircraft, he began to reflect on his life. I’m not happy. This whole thing is not working, he admitted to himself. Everything I read in the Bible is either a lie or its true. It’s all or nothing. From reading the Bible I understand God is my creator. If Jesus can raise someone from the dead and forgive my sins, that’s exactly what God has for me.

At that moment, Mark Rose surrendered his life to Jesus Christ. ‘When I landed in Fairbanks I was a different boy, once again.’

Mark Ellis is founder of the acclaimed www.GodReports.com, a recommended website that shares stories, testimonies and videos from the church around the world.