The current head of the National Institutes of Health, Francis S Collins, came to faith after he set out to disprove God.

‘I had always assumed that faith was based on purely emotional and irrational arguments and was astounded to discover that one could build a very strong case for the plausibility of God,’ he noted on CNN. ‘My earlier atheist’s assertion that “I know there is no God” emerged as the least defensible.’A geneticist, Collins was appointed director of the $3 billion international Genome Project in 1993, which completed sequencing the 3.3 billion pairs of nucleotides by 2004. The resulting gene map offers hope to cure genetic disorders. 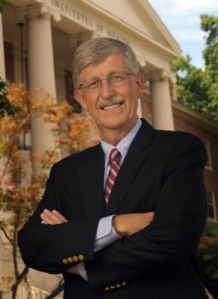 It also gave Francis Collins (left) a spectacular view into the magnificence, order, and finely-tune perfection of the DNA molecule, God’s software for every living thing. Directorship of the Genome Project was touted as the most prestigious job in science at the time.

The universe is a miracle
‘At the most fundamental level, it’s a miracle that there’s a universe at all,’ he told National Geographic. ‘It’s a miracle that allows the possibility of complexity and laws that follow precise mathematical formulas. Contemplating this, an open-minded observer is almost forced to conclude that there must be a ‘must’ behind all this. To me, that qualifies as a miracle, a profound truth that lies outside of scientific explanation.’

He compiled his thoughts in a 2006 book, The Language of God, which posits that biology, astrophysics and psychology all argue in favour of faith in God. During the following year, he founded BioLogos, an organisation that brings together scientists who wish to pursue science and faith in a cohesive unity.

‘Science and faith can actually be mutually enriching and complementary once their proper domains are understood and respected,’ he says. ‘There are some really important questions that science cannot really answer, such as, why is there something instead of nothing? Why are we here? In those domains, I have found that faith provides a better path to answers.’

Moral law – the strongest signpost to God
Of particular importance to his faith is the concept of ‘moral law’ – the denunciation of oppression, murder, treachery, falsehood and the injunction of kindness to the aged, the young, the weak and helpless, to paraphrase C S Lewis.
‘After 28 years as a believer, the moral law stands out for me as the strongest signpost of God,’ he writes in his book.

Collins grew up in a family of agnostics in Virginia’s Shenandoah Valley. By the time he graduated medical school, he described himself as a full-fledged atheist. But then a patient queried him about his own faith. Prodded thus, he decided to research the point and debunk faith.

‘When I got to college and was challenged about what my beliefs were, I realised I had no idea what they were,’ he told PBS. ‘I listened to others make an argument that religion and beliefs were basically a superstition, and I began to think – Yeah, that’s probably what I believe, too.’

As a graduate student at Yale, he marveled at how virtually everything in the universe could be described by a ‘second-order differential equation.’

Discovering that faith gives strength to the sick
After obtaining a degree in quantum mechanics, he decided to change paths in life and pursued medicine. As a resident he watched people suffering terminal disease without blaming God. To the contrary, faith seemed to give them strength and, in many cases, improve their symptoms, he said.

‘They had terrible diseases from which they were probably not going to escape, and yet instead of railing at God, they seemed to lean on their faith as a source of great comfort and reassurance,’ he said. ‘They weren’t, somehow, perceiving it as the really awful thing that it seemed to me to be. And that was interesting and puzzling and unsettling.’

‘I had made a decision to reject any faith view of the world without ever really knowing what it was that I had rejected. And that worried me,’ he said. ‘As a scientist, you’re not supposed to make decisions without the data. It was pretty clear I hadn’t done any data collecting here about what these faiths stood for.’

So he turned to C S Lewis’ Mere Christianity. As he read, his assumptions about faith in God were shaken. It wasn’t easy or fun reading. ‘It was painful,’ he said. ‘The idea that you would arrive at faith because it made sense, because it was rational, because it was the most appropriate choice when presented with the data, that was a new concept.’

Finally accepting God
He was 27. After months of wrestling over the question of God, he finally broke down. One day, hiking in the Cascade Mountains, admiring the grandeur of God’s creation, he said ‘yes’ to God.

‘I’ve never turned back,’ Collins said. ‘That was the most significant moment in my life.’

‘Like most scientists, I had this fear that having accepted something in the way of a spiritual worldview, I would be perceived as having gone just a little bit soft,’ he noted. ‘That this was not compatible with the rigorous ‘show me the data’ attitude that a scientist is supposed to have towards all things.’

God – the most plausible of choices
In 2005, Collins was named jointly with genome colleague Craig Venter America’s Best Leaders by U.S. News & World Report and the Harvard University Center for Public Leadership.

But now he’s so open about belief that he’s drawn fire from vocal atheists. Atheist Sam Harris criticised his nomination to head the NIH by President Barak Obama: ‘Must we really entrust the future of biomedical research in the United States to a man who sincerely believes that a scientific understanding of human nature is impossible?’

Collins assumed the NIH office in 2009. He is 65 as of April. He loves motorcycle riding and playing rock. He’s formed a band of NIH scientists that duels with a band of scientists from Johns Hopkins University.

‘I did have a moment where I became a believer,’ he told Anderson Cooper. ‘I had struggled for two years with this debate within myself gradually coming to the conclusion that belief in God was the most plausible of the choices. After many months of struggling whether to make that leap, on a beautiful Fall day hiking in the Northwest, with my mind a little more clear than usual because there were not the usual distractions, I felt like I could no longer resist. I became a believer that day.’

Mark Ellis is a seasoned ASSIST senior correspondent (www.assistnews.net) and founder of the acclaimed www.Godreports.com