Ever watch some old movies (or current ones) or TV series such as The Darling Buds of May where Pop Larkin would pour heaps of tomato sauce over virtually everything on the plate? Usually one goes ‘Yuk’ in horror.

And what about people who pour far too much salt on their meals?

Salt consumption has increased during modern times. Every now and then we hear its usage being raised in conversation, usually a concerned ‘You take too much salt, that’s bad for you!’ Or we hear or read of some report of the health effects of salt associated with the consumption too little salt.

A mineral composed primarily of sodium chloride, salt is used in food for both preservation and flavour. (Just as ‘good salt Christians’ are supposed to be – enriching this troubled world).

Sodium ions are needed in small quantities by most living creatures. Salt is involved in regulating the water content (fluid balance) of the body and the sodium ion itself is used for electrical signalling in the nervous system. Regarded as an essential nutrient, sodium is involved in numerous cellular and organ functions. Conversely salt intake that is too low may also increase risk for cardiovascular disease and early death.

It’s been noted that scientists have become aware of health risks associated with high salt intake, including high blood pressure in sensitive individuals. Consequently, health authorities recommend limitations on dietary sodium. Doctors will recommend what we should consume daily depending on age.

In summarising the above, there is good salt and bad salt. Good ‘Christian salt’ should be poured out in heaps! A dying world needs this kind of salt. 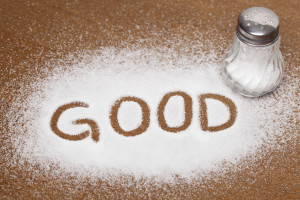 ‘Good’ is a word that sits well with people – recently we found ourselves commending a number of principled folk, both Christian and non-Christian who had either helped us, or a friend we’d sent to them for assistance which they readily gave. We said very simply but sincerely: ‘You’re good salt!’

How their faces lit up in appreciation! ‘Good salt’ speaks highly of good, generous people – Christians particularly are meant to be such people! And church leaders are especially called be of a high reputation outside the church, not just inside (1 Timothy 3:7) – as the Message Bible puts it: ‘Outsiders must think well of him’ (We would add ‘or her’ here!).

Good salt – mission possible
We’re reminded of Jesus’ words in Luke 14:34 (Mge), ‘Salt is excellent. But if the salt goes flat, it’s useless, good for nothing. Are you listening to this? Really listening?’

And his charge in Matthew 5:13 (Mge), ‘Let me tell you why you are here. You’re here to be salt-seasoning that brings out the God-flavours of this earth. If you lose your saltiness, how will people taste godliness? You’ve lost your usefulness and will end up in the garbage.’

Oops! No Christian wants to end up in the garbage bin because we’re not salty enough, that God couldn’t use us to help the lost in sin to taste godliness! That word ‘good’ – kalos – means beautiful, valuable, virtuous, literally and morally good, worthy. Not that’s not something we should lose!

And we should note that the above scriptures are not a Tom Cruise MI – Mission Impossible – statement, but every Christian’s MP – Mission Possible statement!

Good salt Christians are active ones, aware that we’re here to make a difference in the world, to touch the lives of those without Christ who need to discover the gospel but to give assistance to anyone who has a need and we can help. As such we are indeed meant to be light-bringers  revealing the character of Jesus and the love of God! (See Norman and Margaret Moss’ article Bringing Light to Inaccessible Places).

As Daphne Delay has written (http://www1.cbn.com/devotions/salt-of-the-earth) we’re ‘called the salt of the earth because our lives enhance and give meaning to this existence we call life. Before salvation, we were like grains of sand, too numerous to count. But after receiving Christ, we were transformed – no longer like minuscule debris of rock having little or no difference from another lost piece of sand, to something distinctive in taste, texture, and aroma. It may be an odd analogy, but Jesus compared believers to salt for a reason. Salt is a dietary mineral, used for flavouring and preservation.’

Recently several church leaders and anointed preachers have been calling their people to fulfil the universal church’s commission to reach out locally to the needy, especially those without Christ. To do so in love and by example… Faith-filled believers in action who –

Jesus doesn’t have to say ‘Are you listening to this? Really listening?’ twice to such believers!

And, incidentally, relying on the Holy Spirit makes this easier than it sounds, and so enjoyable, enabling us to fulfil every ‘flavouring, preservation action’ asked of us by Jesus. This is mission possible, the body itself in action, not the flock irresponsibly relying on pastoral leadership to do all the work!

Mark 9:50 (NLT) encourages, indeed commands, ‘You must have the qualities of salt among yourselves’; the Message reads ‘Be preservatives yourselves.’ This mission possible produces good salt Christians, bringing balance and a sweet flavour taste not only among each other– and helping in growing their local vineyard of the church of the great salt-giver – but to a world in trouble!

He writes: ‘Humorist Mark Twain once said, “If Christ were here, there is one thing he would not be, a Christian.” Let’s prove him wrong as we behave in the opposite spirit of the world, like the “hidden figures” in the film. There’s never been a better time for us to be the “salt of the earth.” And remember, “Blessed are the peacemakers, for they shall be called the sons of God” (Matthew 5:9).’ Charisma is highly recommended – link: https://goo.gl/7Txwut

Lost savour salt is bad news
On the other hand there’s bad salt! This is the result of salt abused and turned harmful. No wonder Jesus asked, ‘What good is salt if it has lost its flavour?’

How could good salt Christians lose our flavour? Oh we forget that the devil is out to bring us down! He remains full of tricks and knows when to catch us unaware and catch us off guard. He so craftily slips in self-doubt, feelings of inadequacy, uselessness, not being wanted or used by oversight.

He also takes advantage of unexpected illnesses, family and marital problems, not to mention finance, job loss, vehicle accidents… the list goes on! And then there are those issues that are totally our own fault – lack of Bible reading and meditation, praying, worshipping God, not fellowshipping with the body of Christ, not wanting to be involve with the church program, dropping out, ignoring our God-give responsibilities, reneging on our commitments, seeking one’s own agenda… this list goes on too.

Something Peter wrote ties in here: ‘Friends, when life gets really difficult, don’t jump to the conclusion that God isn’t on the job’ (1 Peter 4:12 Mge).

God is always there, in charge, on our case! He will never leave us or forsake us – Hebrews 13:5 Mge, ‘Be relaxed with what you have. Since God assured us, “I’ll never let you down, never walk off and leave you.’ No matter what comes against us as we obey Jesus’ direction ‘to flavour the world’ God will help us be good salt!

Good salt Christians are relaxed in Christ. Oh we may have to give ourselves a pep talk at times – or allow a good friend or a soundly Bible-based minister to do so… but we are a victorious people. The Holy Spirit is there to refill us anew with fresh energy and renewed commitment.

Some people call salt a seasoning. Maybe it’s time for some of us to have a re-seasoning, a fresh charismatic renewal! What we talked about above is all about attitude, the right attitude, a heart thing – salt with heart.