December – this mad month of packed shops – many playing unassociated loud, ear bending music (like certain churches!) – are busily selling Christmas decorations and presents. It’s great to note that some stores are season-minded and resound with timely precious carols such as Hark the Herald Angels Sing.

Christmas – the time to be joyful, give gifts, demonstrate love, and especially for Christians to celebrate with thanks the gift of God of his Son, our Saviour Jesus Christ.

Overall Christmas is a time of expectancy, even down to ‘Where to park, what gifts to get’ and later ‘What will be inside my parcel Christmas morn? What Christmas lunch?’

It’ll be fun in our home… we’ll have our precious daughter Wendy who was born on Christmas Day – I was certainly expecting that Christmas quite some time ago! – and family members for lunch, even though our rental is on the small size! (Our new home is being built so our furniture is packed away and we only have a tiny four-place table to work around).

But it’ll be fun though, a time of love shared in jovial companionship, caring for each other and good tasty food – I’ve been busy working on a well-planned spread that will ensure we all enjoy our time together! Our expectation?  A day well shared together.

The most incredible expectancy
As I consider Christmas and expectations, I think of a special expectancy, one beyond this secular, business-centred, money-centred season… I think outside of the box we’ve labelled ‘Christmas’, beyond the temporary fun that mythical-Santa following brings, beyond enjoyable mealtimes and I consider afresh the real Christmas, ‘the genuine Christmas’ message of Isaiah 9:6.

In that scripture the prophet declares the heart of the real Christmas message: ‘For unto us a child is born, to us a Son is given, and the government will be on his shoulders. And he will be called Wonderful Counsellor, Mighty God, Everlasting Father, Prince of Peace.’

What an incredible prophecy regarding the birth of Jesus. And some 2000 years ago that most amazing event in all history occurred – God came down to earth… as a baby, born of the virgin called Mary, to pay the penalty of our sins himself and save us sinners, to open his great gift of intimate fellowship with himself.

It was a time of incredible expectation for people such as those shepherds who heard and accepted the angels’ message, for Mary and Joseph, the locals the shepherds hurried to share the good news with, and for the Magi!

This Christmas should be a time of fresh expectation for all who know God, and are open to the Holy Spirit moving in unusual, supernatural ways to bring about God’s purposes!

So, regarding this coming Christmas morning, when many are merely looking forward to pressies and a Christmas feed, not thinking much at all about the real meaning of Christmas – especially those who don’t know Jesus the real gift of Christmas in a personal way – I want to remind us of some who were living in high expectation 2000 years ago… and some who weren’t.

Mary
She was definitely expecting!

But she was also expecting in her heart. This little, probably only 19-year-old had heard from God through his angel that she, a virgin, would conceive by the work of the Holy Spirit a son who would be called ‘Emmanuel’  meaning ‘God with us’ – thus fulfilling the prophecy of Isaiah 7: 14.

Mary’s response to the seeming impossibility of her immaculate conception? She heard the angel declare, ‘For no word from God will ever fail’ and promptly, willingly answered, ‘I am the Lord’s servant, May your word to me be fulfilled’ (Luke 1:37-38).

As far as Mary was concerned her whole being was God’s to be used in whatever service he required. She was completely open to being used by God whatever the personal cost. I found a ‘Spiritual Advice’ thought today by John Paul II declaring Mary was on a special mission entrusted to her. I like that thought of entrustment!

Alas Mary  would suffer for her willingness to honour God and serve him… she could have so easily lost Joseph her betrothed, she would suffer scorn, she would go through many heartaches later as Jesus engaged in his ministry and finally go to his shocking death on Calvary.

But on that first pre-Christmas occasion she was full of joyous expectancy, believing that God would keep his promise and all that it would bring forth.

What about us this morning? Have we heard something exciting, perhaps prophetic from God that we should be overjoyed about but instead we are doubting, fearful, concerned? Or are we really living in joyous expectancy of God working a miracle? I hope so.

God and the shepherds
I dare to suggest that our loving, caring God must have been full of bubbly expectancy!

After all he had commanded his angelic host to appear out-of-the-blue (or should I say ‘black’) to unsuspecting shepherds just outside Bethlehem. Surrounded by what must have been an incredible aurora of light, this host brought an amazing revelation to a darkened world (Luke 2: 8-20).

Verses 10-11 tell us that the chief angel prophetically spoke joyous peace to the frightened shepherds, ‘Do not be afraid. I bring you good news that will cause great joy for all the people. Today in the town of David a Saviour has been born to you; he is the Messiah, the Lord.’

Then (Luke 2:13-14)… ‘Suddenly a great company of the heavenly host appeared with the angel, praising God and saying, “Glory to God in the highest heaven, and on earth peace to those on whom his favour rests”.’

God’s favour is on sinful people? Wow! I sense God’s pleasure in announcing the coming of his Son to earth in this unusual way – telling humble shepherds, not the treacherous local king and government. He knew Herod’s insecurity and jealous heart and that he wouldn’t receive a favourable response from him, only a murderous glint.

What was the shepherds’ reaction? Expectancy! Like Mary they too believed they had heard from God… in their case they went immediately to find the Christ-child. And having found the Saviour they promptly spread the good news around that God had come to save his wayward, sinning people.

But what about us – we who have accepted Jesus as Saviour? We’ve been blessed by this good news, we’re saved and on our way to heaven but what about the thousands who don’t know Jesus? Having been so blessed, let’s take every opportunity to praise the Lord and to share the real meaning of Christmas both now and during the coming year.

The locals
Interestingly it was a time when the Israelites were expecting someone special from God; a Saviour like Moses of old who would deliver them from Rome, the ruling invader and enemy, and from Roman bondage and from meaningless, heart-strangling religious bondage (see Dr Jim McClure’s article Christmyth ).

But… they had their own ideas of what the Saviour would be. They certainly didn’t expect God to send a baby! But then, God has ‘this annoying habit’ of doing things his way, not according to our thinking! But then, he’s God!

Maybe that’s why we don’t read much about the people whom the shepherds shared with about the newborn king (Luke 2:17-18) they’d discovered. Many versions say they were ‘amazed’; but the old KJV indicates that they merely ‘wondered’ (thuamazo). Could it be that they just simply ignored him because a baby wasn’t their idea of a king bringing release. Did they also discourage those shepherds of whom we also hear nothing more?

In any case a later generation would discover Jesus as a full-grown man with a powerful, supernatural ministry… and as the suffering Messiah, the one who would bring them their hoped-for release – and from a greater enemy than Rome or religiosity! And God’s good news would be spread around the world… and continues to be spread today! 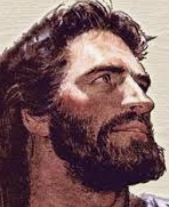 What’s your idea of Jesus? Those old paintings of a weak, insipid looking thin guy with a halo, a yes-man who will do everything our way and be at our beck and call all the time?

Or do we really know him as he is – a man’s man, a woman’s ideal, strong and full of compassion – the Lord who cares so much and to whom we are meant to be in total obedience every day, our dearest friend but also the king of our lives whom we should serve with all of our being. Hmm?

The innkeeper
He was expecting lots of business from the census taking but he certainly wasn’t expecting the Saviour and king to come supernaturally as a baby! If he had, he wouldn’t have offered him a smelly, animal filled stable to be born in. Things would have been spruced up in the inn, the penthouse suite made available real smart! It would have been nothing but the best for King Jesus!

What about our homes? Is Jesus being welcomed every day? Will Christmas Day be pressies, more pressies, turkey, pudding, idle chat and the king of kings never mentioned or invited in?

If you knew that Jesus the holy one of God in all his purity and holiness wanted to spend this Christmas day in your home, is it suitable? Are you and your home ready to receive him or would you have to quickly clear out some smelly rubbish…certain CDs, books, movies, posters, crystals, charms, toys, comics, magazines and such?

And what about your heart? Anything there needing tidying up so that Jesus can ‘feel more comfortable’?

Truth is that at Christmas, and every day, we should be giving Jesus the penthouse suite of our hearts and lives! After all, he is King Jesus and meant to be ruler of our lives.

The magi
The wise men were definitely expecting, they had longed for this time travelling far to find and worship the newborn king. People of faith they had been following a most unusual sign, a star that travelled with them and guided them to King Jesus. They would not be thrown at finding the king was a babe and be merely ‘thuamazo-ed’… wondering. No, they honoured him with the best they had (Matthew 2: 2-18) –

I like to think that at Christmas, this traditional time of pressies, Jesus expects a present from us – the gift of giving him our all… our heart and life, especially our trust.

Incidentally, even at that the magi were late – by the time they arrived possibly a year later Jesus was in a house, not that  manager still filled with awestruck shepherds (Matthew 2: 11)! Don’t drag your heels in following your heavenly star in obeying God!

What about us then today?
Let’s be challenged afresh to be expecting much in God this Christmas and in the New Year; let’s find Jesus in a new way, discover anew who he really is – not only the Saviour but our king and friend. And let’s kneel before him afresh, determined to serve him with all our heart!

And if you don’t know the one who is the real joy of Christmas, find a minister or genuine Christian quickly. Or just talk to God direct. Expect to find him!

Every day, not just Christmas Day, comes and goes quickly…