In 586 BC the Babylonian army invaded Judah and laid siege to Jerusalem for a year and a half. The suffering experienced by the people of Jerusalem was intense. The prophet Jeremiah, who lived through those turbulent times, graphically and painfully described what conditions were like in the city of Jerusalem during this time in the book of Lamentations.

In chapter 4 verses 4-6, 9 and 10 he wrote, ‘They let their babies die of hunger and thirst; children are begging for food that no one will give them.  People who once ate the finest foods die starving in the streets; those raised in luxury are pawing through garbage for food. My people have been punished even more than the inhabitants of Sodom, which met a sudden downfall at the hands of God. …  Those who died in the war were better off than those who died later, who starved slowly to death, with no food to keep them alive. The disaster that came to my people brought horror; loving mothers boiled their own children for food’ (GNB).

That horror came to an unimaginable end in 586 BC when the Babylonian army crashed through the city walls and razed the city to the ground. There was not much of it left. Jerusalem was ransacked, the magnificent temple that Solomon had built was totally destroyed and the inhabitants of the city were either killed or exiled to Babylon.  Their joyful songs that were intended to be sung when entering the temple to worship could no longer be sung by the exiles as the temple lay in ruins 1500km away.  And, Jerusalem, the city the psalmist described as ‘beautiful in its loftiness, the joy of the whole earth. … the city of the Great King’ (Psalm 48:2) was now a heap of rubble.

But in 539 BC the Persian king Cyrus overthrew Babylon and a year later permitted the Jews to return to Judah, rebuild the temple, re-establish Jerusalem and restore the devastated community.  Initially around 50,000 Jews made the trip back to Judah.

A spiritual problem
I’ve given this information to try to explain the ministry of Haggai who made the journey back to his devastated homeland and destroyed temple. Under the newly appointed governor, Zerubbabel, work soon began on building a new temple on the site of the old one but discouragement and opposition brought the building to a halt and so it remained for the next 18 years.

Haggai’s message was given to readjust the people’s thinking.  They were disheartened and all passion for a new temple had evaporated. The task was just too great. It was unrealistic to entertain the idea that a temple would ever be built again on Zion!

The people responded to Haggai’s preaching. After a few weeks, probably spent in clearing away the rubble and working on the plans and obtaining resources, the hands-on building of the new temple actually started. 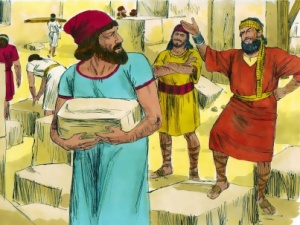 But, sadly, it did not take long before the complaining started. Haggai 2:1 tells us exactly when it began – just less than one month after the building commenced. In verse 3 Haggai addressed all the people, ‘Who of you is left who saw this house in its former glory? How does it look to you now? Does it not seem to you like nothing?’

In Ezra 3:12 we get a little more information about this. Ezra writes, ‘Many of the older priests and Levites and family heads, who had seen the former temple, wept aloud when they saw the foundation of this temple being laid …’

Some of the people were old enough to remember the magnificent temple the Babylonians had destroyed and as they watched the new building going up, they were not only unimpressed, they were also depressed! ‘What a pathetic building,’ they were saying. ‘This isn’t the way it used to be,’ they complained. ‘It looks like nothing,’ they grumbled.

How discouraging that complaining and fault-finding would have been for those who were working hard on the new building. Such grumbling could have brought an end to the whole project so Haggai immediately addressed the matter head-on.

Grumbling and complaining among God’s people is not new!
It was also in the early church and Paul wrote to the church at Philippi, ‘Do everything without complaining or arguing’ (Philippians 2:14).

Complaining is not new – and it has always been destructive!  This blasts out warnings for Christians today!

It was mainly the ‘oldies’ who were doing the complaining in Haggai’s day but ‘oldies’ don’t have a monopoly on a critical and complaining spirit.

Having been a pastor for a long time I’ve discovered that one of the things that most cripples the ministry of a church is a grumbling and complaining spirit. And God hates that!

The bigger picture – doing all for God’s glory
As we see in Haggai, comparisons are not always helpful. Indeed they can be very destructive and a tool used by Satan to obstruct God’s work.

Haggai corrected the people’s complaint by challenging them to stop thinking about how they felt and to get the bigger picture and to see it from God’s perspective.  This new temple was being built to give glory to God.

God was not complaining! Indeed he gave another promise, 2:7, ‘I will fill this house with glory.’  Note that God was saying that his glory would actually fill that very temple.

What some people judged as worthless was judged by God as wholly acceptable – and ultimately it is God’s judgment that counts!  The new temple was being built for the glory of God and, regardless of what people thought, that is what gained God’s approval and that ultimately is what is important in whatever we do for God.

Isn’t that the advice Paul gave in 1 Corinthians 10:31 – ’Do it all for the glory of God.’ Nothing that is done for God’s glory can ever be judged to be worthless!

Recommended are his enlightening and Looking for Answers in a Confusing World; also Grace Revisited, Overview of the Old and New Testaments, Love, Marriage, Divorce and Remarriage, The Masonic Deception, Word of Life in the Old and New Testaments, Interpreting the Letter of James. All are available in electronic version in EPUB, Kindle and PDF formats with hyperlinks and offered free. Link for orders and questions: jbmcclure@gmail.com