(October 22, 2019) Carol Round encourages us to let our Christianity shine forth in a needy world round us…

My neighbours were excited to show me the photos and video of the ten tiny turtles they’d rescued. They’d observed the mother turtle laying her eggs in their yard sometime in mid-summer.

To prevent predators from digging up the eggs, the couple placed an old metal crate over the site and marked it with a fake flower. When I enquired about their new yard ornament on one of my daily walks, I learned about the eggs and was excited about the approaching due date.

Days, weeks and months passed until the couple decided they would dig up the nest. They knew the eggs should have already hatched.

Digging in the darkness
Using a trowel, the couple began digging up the dirt. Roots impeded their progress, but eventually they rescued the hatchlings. As dusk gave away to early darkness, they needed a flashlight to wash the small reptiles.

After removing the dirt from the tiny bodies, the couple placed each turtle into a plastic container. Walking to the nearby lake, they lowered the container into the water to allow the turtles to swim out on their own. The couple thought their rescue mission was over.

However, the turtles kept swimming to the shore where the couple’s wife was shining a flashlight. Then, it dawned on her that the turtles were attracted to the light. Turning the flashlight’s beam toward the lake and moving it gradually away from the shore did the trick. The ten siblings swam away.

The creation of light
Hearing the story of the baby turtles following the light, I was reminded of the many times ‘light is mentioned in scripture. In John 8:12, Jesus tells the Pharisees, ‘I am the light of the world.’

Light is also the second thing God spoke into existence. In Genesis 1, we read ‘in the beginning God created the heavens and the earth.’ The earth had no form. It was empty and dark. So, God created light. His words were the catalyst for creation’s beginnings.

Light in the darkness
When I was a young child, I was afraid of the dark. My mother placed a tiny light in my bedroom so at night, I wouldn’t feel completely alone. Eventually, I outgrew my fear of the dark.

As an adult, I now have another night light so I don’t stumble in the darkness when I rise from sleep to get a drink of water or go to the restroom. 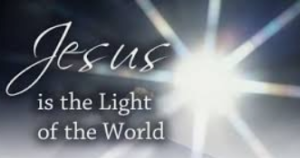 I can see the connection in scripture – In one of his talks, Jesus said to the people, ‘I am the Light of the world. So if you follow me, you won’t be stumbling through the darkness, for living light will flood your path’ (John 8:12 TLB).

Jesus is the living light. When we follow his path, he lights our way as we grow on our spiritual journey.

Staying plugged into the source
Growing on our spiritual journey requires us to stay plugged into our source – Jesus. Only through him can we find our way out of the darkness. Like those turtles, we need a guiding light to show us the way.

If we continue on the path of righteousness, his light will shine through us. Only then can we draw others to the Light. American evangelist, D L Moody once said, ‘We are told to let our light shine, and if it does, we won’t need to tell anybody it does. Lighthouses don’t fire cannons to call attention to the shining – they just shine.’

In Matthew 5:16, Jesus put it this way, ‘In the same way, let your light shine so others can see it. Then they will see the good things you do. And they will bring glory to your Father who is in heaven.

Carol Round, special correspondent with Dan Wooding’s Assist News Service (assistnews@mercyprojects.org / assistnews.net ), follows her passion of using her writing and speaking abilities to inspire others.

Suggested reading: Journaling with Jesus: How to Draw Closer to God; Growing Confidently in Your Faith. Links: Carol’s A Matter of Faith weekly column:  carol@carolaround.com/www.carolaround.com