Life is like a terrifying storm to several at this pandemic time – including some Christians!

And not just because of uncertainties regarding loss of income, delayed/postponed desperately needed operations, increased crime, unruly behaviour in our streets and beaches, lockdown, and such.

Many, including some church leaders, are concerned about the future… and seemingly unanswered prayers. We’ve had some share feelings of ‘I don’t know what I’m meant to be doing… now or in future days. Doesn’t Jesus care?’

Doesn’t Jesus care?
What an audacious, unwarranted question! Of course, he cares!

Remember the Mark 4 incident where Jesus directed his disciples to cross over the lake by boat to a different region?

Verse 37Message recounts that ‘A huge storm came up. Waves poured into the boat, threatening to sink it.’  Verse 38a appears to casually mention that in all this fury ‘Jesus was in the stern, head on a pillow, sleeping!’  Then we read that the obviously frightened disciples ‘woke him up, shouting, “Teacher, don’t you care that we’re going to drown?”’

See the bigger picture here… Jesus’ friends are accusing him of not caring! And with the storm raging around them, they would not have been gently whispering in his ear! No, this would have been a harsh, possibly screaming frantic, ‘Hey! Don’t you care?’ And no acknowledgement of his status as either Rabbi, Teacher or Friend!

Oh, we – yes, we, including Christians – can be so quick to accuse others when things are going wrong or seem to go wrong – as this pandemic time is confirming with hotbed rebellion in certain quarters, even Christian circles. But for Jesus’ disciples who had already heard that he and Father God (John 3:16) deeply cared for people, and witnessed how he blessed and healed troubled people, to accuse him as they did this was the pits. Yes ‘pits’ eg: a ‘something that is very bad’ as one dictionary explains and another as an ‘unpleasant thing.’

It’s considered that this incident happened in 28AD… within two years those panicking disciples would discover the extent of Jesus’ (and Father God’s) caring for them – and the world – when he allowed himself to be mocked, cruelly mistreated, illegally tried, whipped, suffer and die on Calvary’s cross!

Powerful care
‘Care’… that’s melo meaning being concerned, being interested in. Of course Jesus cared!  Jesus was so interested in them that he would prove his concern. 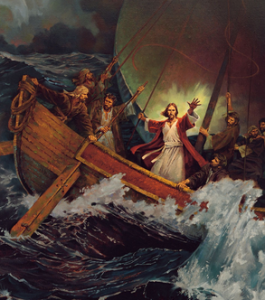 It was a caring Jesus that heard their cry, woke up, shook off sleep, and rebuked the wind, telling and commanding the waves, ‘Silence! Be still!’ Suddenly, verse 39NLT tells us, ‘the wind stopped, and there was a great calm.’

Panic miraculously turned to peace! Then, as Luke 8:25NLT records, Jesus’ challenge was ‘Where is your faith?’

It’s trust in God, faith in Christ that brings us through – or around, or over, or under or however you want to put it that gets us through every storm of life. ‘Faith’ is pistis, indicating persuasion, conviction of the truth of God’s word, and a constant reliance on Jesus!

‘Does Jesus care when my way is dark
With a nameless dread and fear?
As the daylight fades
Into deep night shades,
Does he care enough to be near?
O yes, he cares, I know he cares,
His heart is touched with my grief;
When the days are weary,
The long night dreary,
I know my Saviour cares.’

Jesus sees our storms!
We think of another storm example… this time Jesus isn’t casually sleeping – Mark 6:45-52. Get the picture here…

In this Mark 6 storm the disciples were probably wondering where Jesus was, why he’d left them on their own, and didn’t he know and care that they were in a hot spot! Of course he did. Galilee region was regarded as a hotbed of political activity, some of it violent, and Jesus wanted his disciples not to be caught up in it but to keep moving as he still had much ministry territory to cover before his death for all humankind. As soon as they reached the other side, he continued sharing good kingdom news and demonstrating the power of the God’s Spirit.

A bit like today… around the world are many places regarded as ‘hotbeds’ and while we still have time before the Lord’s return (whichever year that may be! Only the Father knows – Matthew 24:36) we need to take whatever opportunities come our way to share the caring love of Christ! 41.6% of the world’s population 3.23 billion people is still regarded as unreached (Source: Joshua Project).

Beyond life’s storms
There are times we all go through storms, whatever their origin.

In this present one, it is inspiring to learn of Christians, aware that God has ‘something special in store’ for us up ahead and, even though they don’t know exactly what, aren’t worried, are even now led by the Holy Spirit to utilise this stormy season by…