I am hearing more frequently today that Jews, Christians and Muslims worship the same God. It is often stated that there is a strong similarity between the Judaism, Christianity and Islam and that the all three religions, which are monotheistic, share the same religious and spiritual tradition and therefore have so much in common with each other. Some Jewish and Christian leaders are making the same claim.  This syncretistic understanding of those three religions may resonate with the politically correct philosophy of today but is  it true?

The argument is made that, if we were to accept each other’s religion as differing expressions of the same spiritual truths, much of the current hostility – some of which has been manifested in horrific violence – would be defused. Consequently, in the name of tolerance we are told that we should major on the things that the three religions have in common. 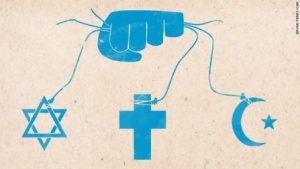 1. Are there things that those religions have in common?
At first glance one may conclude that there are significant similarities between the three religions but those similarities are more superficial than substantial. Let’s consider some of their commonality.

In using the phrase ‘carnal Christianity’ I am not here referring to the life-style practices of those Christians who flout biblical moral principles, but to the behaviour of many Christians who, while apparently reflecting a depth of spirituality, in reality express a carnal form of Christianity!