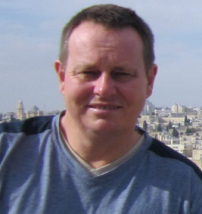 In the autumn of 2011, a new step of faith and direction from God was forming when I was asked by the Manna church to attend the national leaders’ conference in the west of Romania.

Now, to be honest, I was a bit out of my usually ‘energised drive’ to serve God, so I listened to the speakers intently, wondering what God might be saying to me.

Serving God isn’t about ‘titles’
Among many things I’ve learned about serving the Lord as a missionary is patience! Now I was relearning as it was six months later before a new direction in our ministry began to open up. It started with the church asking me to be an elder and my wife Rodica entering joint worship leadership.

Now I didn’t feel anything different generally as I just did what serving God wanted me to do, ‘title’ or not. But slowly I received more prophetic dreams and words from the Lord… and new responsibilities came across my path.

I was commissioned to run a men’s group at a particular centre which, as well as being a Bible study, would offer food… meat and chips with some pop, tea and coffee. I consented, but the first week no one came along – nor the next!

Nevertheless, I enjoyed doing deeper study with God on my own, even if no one else turned up. Rodica thought that if no one came third week, I should just come back home instead of waiting around as I had been doing. As it happened, no one came that week either and so I did as my wife had suggested… but I had no peace at home.

Commitment means being committed
Then I sensed God was teaching me something important… How could I expect commitment if I were not committed myself? END_OF_DOCUMENT_TOKEN_TO_BE_REPLACED

‘We don’t want you to go down there and help them other people,’ a short, dark man stormed threateningly.

On that warm Monday afternoon in the spring of 2000, my construction crew and I had just finished work on homes in this poor Gypsy settlement called the Valley, at the edge of the village of Albesti, Romania. Now we were being threatened by this irate man. His wife, brothers and cousins were all echoing his words.

‘If you go and help them people at the far end of the Valley, like you’ve been helping us, we’re going to beat you up,’ the angry Gypsy man told me through my interpreter.

To Romania with love
I’m an Englishman, born in Manchester and raised in Glossop, a small town nearby.  Being a builder, when God called me to serve him in Romania, I responded with a desire to use my skills to help in every way I could and for over 20 joyous years I’ve been doing so. It was here that I had met and married Rodica. We have a lovely daughter, Sabrina.

House building for the poor has been since 1998 and spread over many villages. Dreams from the Lord about running a ‘feeding with Bible stories to kids’ program in several villages and linking with local churches became part of our outreach. We would buy Bible cartoon DVD stories DVDs for kids showing them as we would feed them in local buildings. Watching these cartoons was a first exposure to the Bible for kids from non-Christian families. And, we praise God, they responded well!

Poor parents were also being touched by God and we would move on from village to village. But… well do I recall one dangerous day in the Albesti village when I was threatened by the man mentioned above! END_OF_DOCUMENT_TOKEN_TO_BE_REPLACED