When we hear from God to move ahead in something new and we obey, we take a step forward and we become more conscious of our personal growth and development in the Lord.

At that exact time we can be assured that many of us will start to face trials and tests in our lives. Why? Because it is often at times of growth in our lives that we find ourselves being stretched!

Anyone in that category right now?
As we stretch and grow – which is ultimately fantastic by the way – and as we are tested and find ourselves in new and strange situations we need to know what is holding us together; what is sitting in our foundations. We need to look more closely at what is happening in our heads and hearts and ask ourselves what we believe and what exactly we hold to be true.

The Lord told Moses to tell Aaron and his sons, ‘This is how you are to bless the Israelites. Say to them: “The Lord bless you and keep you; the Lord make his face shine on you and be gracious to you; the Lord turn his face toward you and give you peace”.’

Surely this is part of God’s process as well – sending them off with a magnificent godly blessing, reminding them that he is God and that he will bless them as he promised he would.

We get tested and stretched don’t we? And, more than ever, we need to ask ourselves what we believe and what exactly we hold to be true. Are we really people of faith? Can we move ahead – trusting God in faith?

Joshua and Caleb – a lesson in faith
The Israelites’ journey of moving on supplies many lessons for us as we too move ahead in faith and trust!

A few chapters later in Numbers after the promise in the Aaronic blessing – as if to teach us one of the great lessons of life – we come across the story of Joshua and Caleb! It’s one of faith and trust – two people standing at odds with the crowd, refusing to cave in or give up, and examining themselves before God to see what they really believe in and hold true when faced with a challenge.

You remember the story – the Israelites are on the edge of inhabiting and possessing the land they have been promised, almost home at last – and God tells Moses to stop and wait for a moment and to send a small group of 12 men into Canaan to spy out the land and bring back a report.

So in they go and when they return they explain how wonderful the land is and it really is full of milk and honey! They even bring back some of the amazing produce to share and display.

But then ten of the twelve start speaking negatively – that although it is truly wonderful Israel can’t possibly go in and occupy this land because the people there are too big and too powerful for them and they would not be able take the land.

Joshua and Caleb encouraged the people differently! Positively they boldly declare, ‘C-mon, we can do this! God promised us this land and he has delivered the land to us. He will go with us. We can do this!’

Why? What is different in them?
God himself describes Caleb in Numbers 14:24 as a person who has ‘a different spirit and follows me wholeheartedly’ and I think we can fairly safely describe what was happening in the hearts of both Caleb and Joshua as faith.

They were living in faith – which was what caused them to be able to see and act differently.

Faith in God held Caleb and Joshua together and gave them the ability to do the things God had called them to do. It will hold us strong too!

What is faith?
‘Faith is being sure of what we hope for and certain of what we do not see’ Hebrews 11:1 NIV. The Message puts it this way: ‘Faith is the firm foundation under everything which makes life worth living.’

The result of every situation is dependent on whose hands it is in – as the following great piece of poetry indicates. It’s simply entitled Hands.

A rod in my hands is just a stick.
A rod in Moses’ hands parted the mighty Red Sea.
It depends whose hands it’s in.

A sling shot in my hands is a crudely constructed kid’s toy.
A sling shot in David’s hand is a mighty weapon that defeated an army.
It depends whose hands it’s in.

Nails in my hands will most likely only produce a blood-soaked mess.
Nails in Jesus Christ’s hands produced salvation and healing for the entire world.
It all depends whose hands it’s in.

What undergirds faith?
Hebrews 11:6 declares that ‘Without faith it is impossible to please God because anyone who comes to him must believe that he exists and that he rewards those who earnestly seek him.’

So what undergirds faith? Conviction! For faith to exist there must be a strong conviction about these two things:

What does faith look like?
Faith has to be able to see beyond circumstance, doesn’t it?

Ever seen that advertisement that allegedly appeared in a London newspaper back in 1914?

Now that would take a bit of faith wouldn’t it? Actually thousands of people apparently responded to that advertisement because it was signed by a very famous man of the time, Arctic explorer, Sir Ernest Shackleton. Some people question whether or not that advertisement ever appeared, but it is a great story nonetheless.

And there is still a very clear point to it – even though the journey itself may be known in advance to contain a few pitfalls faith says that we will still sign up and get involved if we know and trust the leader.

Our faith in God is the same – we must be prepared to go the distance even when times get tough. And this is why the story of Caleb and Joshua is so powerful.  Because they experienced a revelation of faith.

I remember many years ago hearing my friend Pastor Danny Guglielmucci say, ‘Risks taken out of revelation will be rewarded with results.’

God told him that while he was walking on the beach one day and basically it sums up faith. If you step out without God it is just a risk, but if you hear from God and have a revelation then what the world may see as a risk is actually faith in action, and it will be rewarded with results.

You start to learn that God’s got your back the whole way and he’s leading you toward your best life and your best self. What a brilliant summation of living in faith. And that is what we see in Caleb and Joshua.

Living in faith starts with a revelation of faith which teaches us that God is with us every step of the way. I am sure most readers are aware of the famous Footprints in the Sand poem which details the fact that even when we cannot see God he is there with us giving us his presence. 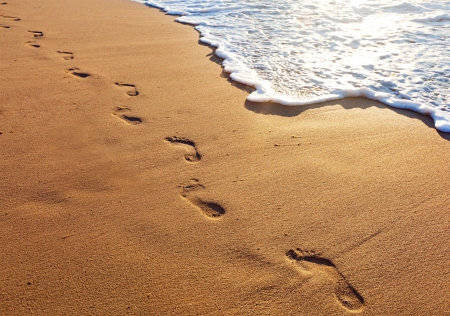 There are several different versions of this oft-quoted poem but the heart of them all is this: The writer recalls walking on a beach with God, leaving two sets of footprints behind them, a representation of his life.

As he looks behind sometimes he sees only one set of prints – representing the lowest and most hopeless moments of his life. He questions God, believing that the Lord must have abandoned him  during those times.

God’s explanation? ‘During your times of trial and suffering, when you see only one set of footprints, that’s when that I was carrying you.’

Prayer too is so important when living and moving in faith
Let’s choose to experience the strength available to us by connecting to God in conversation through prayer.

Easter reminds us of the great truth that Jesus overcame even death on a cross as he followed his Father’s directions. Through all we have received through his Calvary victory – salvation and more – we can boldly take steps forward in our personal growth and development. Our God is with us – let’s be like Caleb and Joshua!